Okay so someone who is in the Disney heroes battle mode Discord is apparently being threatened by getting kicked off it. They go by ZooTycooner34. And I want to know if you guys know anything about this.

Can’t you check for yourself?

The reason for kicking seems legit. They’re spamming too much. Although… 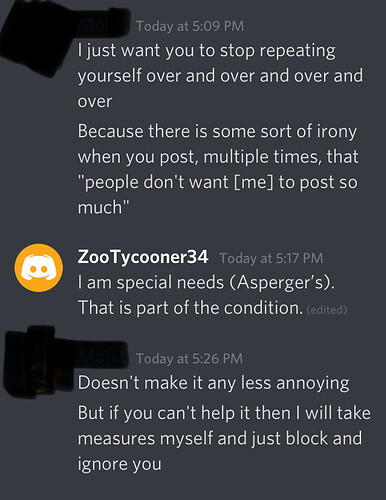 Can’t blame them, then

As a person who has been around with special needs people. I honestly think it’s not right.

Keep in mind the person speaking to Zoo is not a moderator. He has no power to kick or ban him from the server.

Well Zoo is in my Discord now right now.

I might get a whole world of hate for this, but…isn’t it kinda wrong for people with special needs to use them as an excuse to do what they wish?

Not targeting you, Mister toon, even with your autism you are still a fine member of our community, but just because you have special needs doesn’t mean you could or should (and you specifically are not, to be clear) break the rules or not have the rules applied to you?

Maybe I’m misunderstanding what Asperger’s Syndrome is, or maybe I don’t understand the context of the defined spam? I understand that it often involves repeat behavior, and a lack of understanding for non-verbal communication, but is this person sincerely having an issue or just using it as an excuse to do what they want?

That discord server doesn’t have any sort of affiliation to PB or Disney Heroes, it’s a fan server. Take it up with them.

Just saw this, and yeah I can say that ZooTycooner34 has left the server if not been kicked, so they are thankful out of the server now if the server you are referring to are the Discord where Musketeer is the current main admin.

Though, I am sorry you had to go through this Slime_Girl_Joy and if there are anything more me as a moderator in that server can do, I gladly help you.

Although, I think that might be an another server as I at least don’t recognize that person and that spamming problem.
.

As far as Asperger goes, I don’t know exactly what they did in the sense of how much, but I can say that Asperger can’t 100% excuse such things even if bring understanding to why they did such, that doesn’t mean they can to say hide behind it and not accept that they have done something they shouldn’t.

Aspergers from what I understand have a bit of a spectrum, like some do have a fair enough of special needs or are worse at talking in the sense of not knowing the social codes and body language ques such.
On the other side of the spectrum of Asperger there are people who are basically like normal people just more are more than usual focusing on their interest preferably, and maybe other smaller Asperger quirks though do overall well in life and one wouldn’t necessarily know something was different with them in the sense that they had Asperger.

That’s how I understand Asperger at least I think.

I think that might be an another server as I at least don’t recognize that person and that spamming problem.

That’s where they are usually at

Ah I see and yeah, that explain why I didn’t know anything.

As an Autistinite myself, i believe your understanding on Autism is right on the button.

Hehe, thanks and yeah, I think that should be about right right from what I have learned :-).

Basically 2 version of Asperger and kind of Autism as well.
The more special need Asperger and the Geek/Passion Asperger with smaller Asperger quirks like maybe more easily overloaded sensory wise by like loud sounds.

Of course there are more in-between there, but like that’s the main ends of the spectrum at least :-).