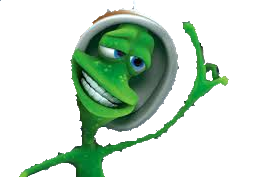 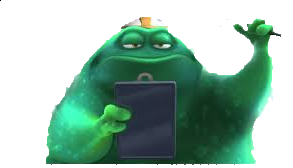 While trying his best to pass his exam, Stu causes mayhem on the battlefield.

Stu & Mr. B are a midline control pair

Entrance: A control panel with many switches appears on the battlefield. Stu and Mr. B walk next to it, then Stu sits on his chair while Mr. B takes a notebook and a pen.

Victory: Mr. B allows Stu to drive the UFO, and he holds the steering yoke proudly.

Basic Attack: Stu toggles a switch, and the tractor beam hits the closest enemy, dealing damage and knocking them back a short distance.

Normal Damage
Stu starts toggling random switches out of frustration. The traction beam hits the enemy with the most energy, removing 100 energy per second from them and stunning them while this skill is active. The beam also causes the target to bounce randomly around the enemy team, dealing X damage to each enemy hit.

Stu and Mr. B can’t use basic attacks or other skills while “Traction Mayhem” is active.

Green Skill: Careful Examination
Mr. B takes notes of the exam, inciting Stu to try harder. This grants them 100% attack speed for 12 seconds and 5 stacks of Hardy, and heals them X HP per second for 10 seconds.

Normal Damage
When Stu and Mr. B are K.O.ed, the UFO crashes on the battlefield, dealing damage to all enemies and stunning them for 8 seconds.

Normal Damage
With every 3rd basic attack, the traction beam deals X extra damage to the target, knocks them back further and stuns them for 10 seconds.

Whenever an enemy is stunned by Stu & Mr. B, the enemy loses 50 tenacity.

The extra buffs from “Careful Examination” have a chance to fail on enemies above level Z.

Hope you enjoyed!
And sorry for bad quality images…

No problem! Making a hero concept out of such a simple character was a fun challenge

Awesome! Glad so many cool concepts are coming out of this contest. Glad it was a fun challenge!

simple character was a fun challenge

Ain’t that the truth lol

If anything finding some actual quotes for the characters is difficult. Solution? Onomatopoeia

I just put the stutter because It’s literally the only thing similar to a word they say.