I don’t know if anyone has seen this already but, I think the game might be teasing us about bringing characters from Disney and Pixar’s Cars to the game, starting with Lightning McQueen. 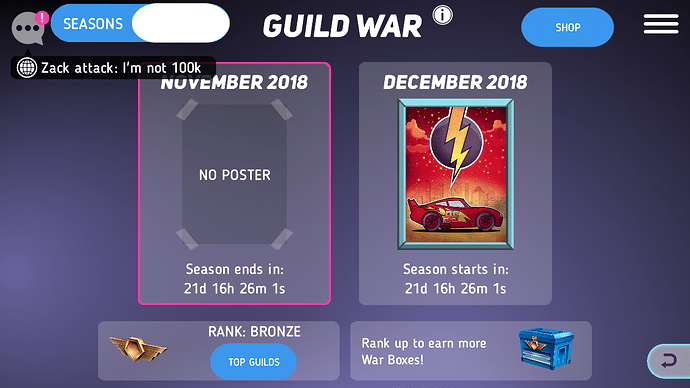 It’s just a poster… nothing special about that.

He wasnt in an update. (Mr incredible )

Its just poster (same as badge) this not mean we will get this character.

I agree with @Musketeer. As I said, it’s just a poster, nothing more, nothing less. Same goes for the badges, just because it’s connected to a potential character, doesn’t mean the said character will be implemented.

“But you don’t know if this leak is true. Besides, Ursula is listed as well, but then, why is she not even a sign-in villain unless she will be in December.”

First of all, look at this Status Conditions List. Look at “Hexed”.

“This unit will be stunned when using its Active Ability”

Don’t you think that’s too overpowered for a Sign-in Hero? Personally, I think she’ll be the next V.I.P Hero.

“… and it’s pretty unlikely that she will be added since the other villains were added only because of Halloween.”

First of all, you offend me with the whole “Villains are only added because of Halloween” thing. Just because Halloween’s over, doesn’t mean that Villains aren’t going to be added anymore. Disney Heroes and PerBlue started adding the Villains, so it’s fitting that they add at least 1 villain every update.

Did not mean to offending or inslusting anyone so exuse me you proofed she will come from the screenshot but how i can get into this screen? If the 6 another leaked charthers will be added with her in december or late november would say we will probaly get speedy and metar in jaunray or feburay maybe

It’s ok. Who are these “6 leaked characters” you are talking about?

Oh, those? They have been “teased” a long time ago, yet they haven’t been released…

The new sign in hero for december gonna be jack skellington*

I hope it’s the Tim Burton versions of Alice and the hatter because, those two are way better Fighters compared to the animated counterparts.

Nope its ralph, but should have been him

As its December 29th…I think they figured that out lol