This is my concept for Doctor Edgar Zomboss. Feedback is appreciated. 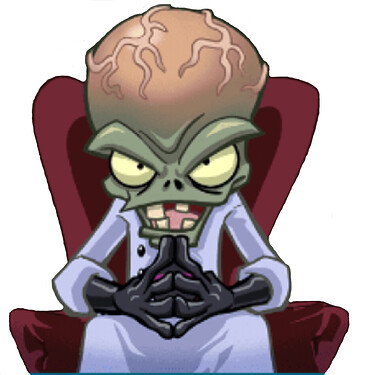 Trial Team: Yellow
Collections: Control, Stun, Charm, Shield
Entrance: Descends from the Zombot
Victory: Laughs evilly
Defeat: Rises a Peace Flag
Basic Attack: See Passive
Description: Dr. Zomboss will zombify the enemy lines with his numerous waves of zombies!
Quote: “You have failed to submit to our rightful claim. Be advised that unless you comply, we will be forced to take extreme action. Please, remit your home and brains to us forthwith.
Sincerely, Doctor Edgar Zomboss.”

A Huge Wave of Zombies is approaching! 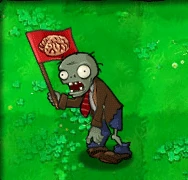 Passive: Instead of doing a basic attack, Dr. Zomboss summons a Basic Zombie to the frontline. The basic Zombie has X HP and deals Y damage with his basic attack. Zombies grant 1 stack of “Zombified” to the enemies they attack. Each stack of zombified slows enemies down by 10%. There can be a maximum of 5 stacks of “Zombified” in each enemy. If there’s an enemy with the maximum amount of stacks, zombies will rather attack other enemies. There can be a maximum of 5 zombie summonings in the battlefield. Zomboss and his zombies cannot receive stacks of “Zombified”.

Jack in The Box

When a Basic Zombie is K.Oed, Dr. Zomboss calls in a Jack in The Box Zombie to the middle of the enemie lines. This zombie has X HP, and instead of attacking, it plays the jack in the box, applying “Distract” to all enemies while playing it. When the Jack In The Box is K.Oed, he explodes dealing Y damage to nearby enemies and stunning them for 8 seconds. There can only be one Jack In The Box Zombie on the field. This skill has a cooldown of 8 seconds.

Dr. Zomboss calls in a Bungee Zombie, which will pick and take away from the battlefield the farthest enemy for 5 seconds. Then, the bungee Zombie drops that enemy, dealing X Damage, applying 2 stacks of “Zombified” and stunning them for 10 seconds.

Undead Intellectual
Enemies stunned while Dr. Zomboss is on the battefield receive 1 stack of Zombified.
Dr. Zomboss and his summonings cannot be charmed.
The Charm immunity might fail if Dr. Zomboss is above level X.

Brainiac Maniac
Now, Dr. Zomboss basic zombies will be summoned with a shield with W HP. When the shield is destroyed, the Zombies gain +50% attack and movement speed and Basic Damage.
Every time an enemy is disabled, Dr. Zomboss grants himself 1 stack of Hardy.

Dr. Zomboss + Dr. Drakken
Campaign: Crazy Cientists: Dr. Zomboss and Dr. Drakken plan to conquer the city, but disagree in what to the with it. While Zomboss wants to turn everyone into a Zombie, Drakken wants to enslave them all.
Allies: Jack Skellington, Sally, Syndrome
Disk Name: Artificial Brain
Effects: Enemies with stacks of “Zombified” now lose X reality per stack
Star Effect: “A Huge Wave of Zombies is Approaching!” now silences enemies that are not charmed for 2 seconds(+2 per star)

Dr. Zomboss + Dr. Facilier
Campaign: Supernatural Science: Dr. Zomboss is curious about Facilier’s Friends on the Other Side, while Faciler is curious about how Zomboss created zombies. So, they try to combine both elements in one.
Allies: Maleficent, Ursula, Davy Jones.
Disk Name: Friends On the Other Side of the Lawn
Effects: Dr. Zomboss’ disables now last 10% more in Cursed enemies. Dr. Zomboss and his Zombies now deal X extra damage to Cursed enemies.
Star Effect: Now, while playing the Jack In The Box, The Jack in the box Zombie will Curse enemies. After he explodes, the enemies will remain cursed for 2 seconds(+2 per star)

If all 5 enemy heroes are charmed by this skill, you win the battle. (Summonings are not counted).

Sorry for revive but I noticed this. I think that´s OP

The Box is K.Oed, he explodes dealing Y damage to nearby enemies and stunning them for 8 seconds.

Considering that the zombies are like Beakers, this would be OP too because the zombie would get destroyed very easy and then this one would appear and since it distracts I think it would be killed in some seconds and then 8 seconds of stun to nearby enemies and while they are stunned a frontline hero would be destroyong other Zombie and then all over again so the stun would never end. (if there´s a frontline hero) (I just imagined that scenario, I could be wrong)

Dr. Zomboss calls in a Bungee Zombie, and the player can choose one enemy for him to pick and take away from the battlefield for 5 seconds. Then, the bungee Zombie drops that enemy, dealing X Damage, applying 2 stacks of “Zombified” and stunning them for 10 seconds. If on auto, the Bungee Zombie will pick the backmost enemy.

I don´t think you can pick who to damage in blue skills, only in white skills

Now, Dr. Zomboss basic zombies will be summoned with a shield with W HP. When the shield is destroyed, the Zombies gain +50% attack and movement speed and Basic Damage.