Welp. I haven’t done an unlikely concept ever since Nihilego. It’s been almost 6 months, and I don’t know how this one will turn out. Anyways here is a video if you wanna see her in action. 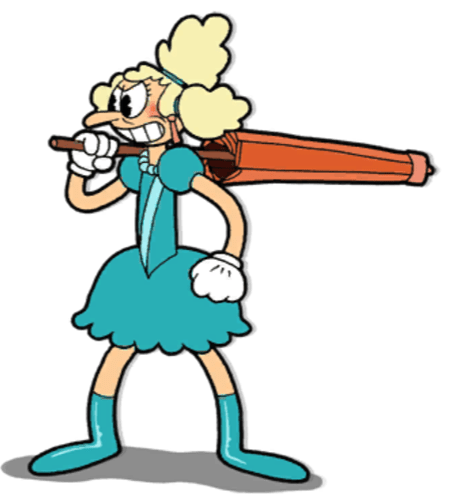 A stage actress who is prideful in her work, Sally uses her talents to stall her enemies.

Entrance: Sally appears in her position wearing a wedding gown and holding a bouquet of flowers. Then, she puts away her flowers and takes out her umbrella. Meanwhile, the gown disperses, revealing her true outfit.

Victory: Sally puts away her umbrella and clasps her hands, moving them around with pride

Basic Attack: Sally spins her umbrella around, dropping two toy mice from it. Then, the toys scurry through the battlefield in opposite directions, dealing Y damage to enemies they pass through.

Normal Damage
Sally disappears using her umbrella. Then, after 1 second, she drops right behind the frontmost enemy, dealing Y damage to them and surrounding enemies.

Enemies damaged by this skill are stunned for 9 seconds.

Stun may fail against enemies above level Z.

Normal Damage
Sally jumps into the air and spins up and down, dropping 3 fans onto the ground below.

Enemies who step on the fans lose X Armor, are dealt X damage, and are stunned or charmed for 7 seconds.

The fans may disappear after 12 seconds.

Blue Skill: Attractive Kiss
Sally blows a kiss at a random enemy, charming them for 9 seconds. If that enemy is disabled, all other disables are cleansed, but return when the charm ends.

Charm may fail against enemies above level Z.

Normal Damage
4 seconds after Sally is defeated, her umbrella spins like a top across the battlefield, dealing X damage to enemies it passes through and extending all of their disables by 4 seconds.

Disable extension may fail against enemies above level Z.

Red Skill: Break a Leg
Sally gains 50 energy whenever an enemy is disabled or gains a buff.

Disables last 20% longer on the “Most Wanted” enemy.

The enemy dealing the most damage is automatically given the “Most Wanted” status.

What a beautiful play! The cup defeating an actress, is the most exciting play ever. Great concept too!

What kind of damage does “Spinning umbrella” do? And 2 seconds disable extensions is a small amount so maybe make it 5-8 because we have Simba and Nala who increase them by 5, Minnie who increases them by 10 seconds so 5-8 seconds seems reasonable.