Description: Father and Son come together to chomp up some baddies! Well… Emile at least… 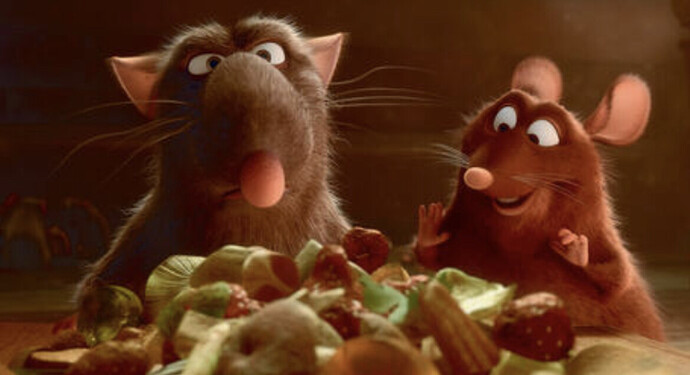 Height: About as tall as Chip & Dale

Entrance: Emile will walk in with a piece of cheese, with Django in front of him. When they get into position, Django will snag the piece of cheese out of Emile’s hands and throw in out of the battlefield.

Basic Attack: Emile will throw a half of a piece of cheese dealing 670 normal damage. Emile will eat the rest of the cheese healing him and Django 800 HP.)

Victory: Emile will eat a piece of cheese with a big grin on his face. Meanwhile, Django will softly chuckle.

Defeat: Emile will run into Django causing both of them to fall down.

(Django will whistle causing a swarm of rats to charge at the enemies. This will deal 2028 fantastic damage.)

Green Skill: Pot Drop (Emile and Django will slowly walk towards and opponent and… BLAM! They will drop a pot on their head stunning them for 5 seconds and dealing 3000 normal damage.)

(Emile and Django will tussle with the closest opponent. The opponent will get moved to the back and the attack deals 3507 fantastic damage.)

(Raving Rampage will now deal 4000 fantastic damage and will stun opponents for 5 seconds.)

“The More The Merrier”

Remy asks Emile and Django if they could help with a dish he and Linguini are making.

When an enemy is stunned, they will now lose 90 energy.

Emile suggests that they gather all the rodents and start a riot. Django thinks it’s a stupid idea.