Feel free to leave any feedback and correct any mistakes! I really liked making this concept, so I hope you enjoy it!

His talent and charisma are only a facade to his true nature: a ruthless, greedy man that is capable of doing anything to keep his reputation. Ernesto De La Cruz will control the battlefield with his powerful voice and intoxicating drinks.

“Murdered? I’m the one who’s willing to do what it takes to seize my moment. Whatever it takes.”

Mastery Collections: Control, Stun.
Entrance: Ernesto walks into position, looking resigned. He then offers a toast to the Betrayed enemy, and drinks from his own cup. If green skill is unlocked, he will also throw his glass at the enemy with the most armor.
Victory: Ernesto Smirks and then sings loudly.
Defeat: The Bell that killed Ernesto hits him once again.
Basic Attack: Ernesto De La Cruz sings, damaging nearby enemies.

The DoT length extension might fail in enemies above level Z

The Drink of Fate

Normal Damage
Now, when Ernesto drinks from his glass at the start of the wave, he grants himself 300 energy. Then, he throws it at the enemy with the most armor, applying a DoT effect of X Damage per second for 10 seconds and stunning that enemy for 10 seconds. If that enemy was the Betrayed enemy, the stun is extended by 5 seconds and the DoT effect deals double damage.

Normal Damage
When an enemy would activate a skill that applies a buff to himself or an ally, Ernesto counters by singing a stolen song, silencing that enemy for 6 seconds and applying that buff to himself and his allies. If this skill counters the Betrayed enemy, they also receive a DoT effect of X damage per second for 6 seconds. Ernesto can counter a buff once every 8 seconds.

Normal Damage
When an enemy is K.Oed for the first time, Ernesto offers a Toast in their memory, applying all the effects from The Drink of Fate. Now, when Ernesto throws his glass, it shatters, leaving glass shards on the ground around the hit enemy that apply a DoT effect of X damage per second for 6 seconds to the enemies that step on them.

Whatever it Takes
If the first K.Oed enemy was the Betrayed enemy, Remember Me can now apply Betrayed to another enemy.
When an enemy is disabled while having a DoT effect, or vice versa, both debuffs’ lengths are extended by 5 seconds.
Ernesto receives 1 Stack of Hardy whenever the Betrayed enemy would receive a buff, or an enemy is interrupted while trying to apply a buff.

Is Charged In Battle When: DoT effects are applied to enemies 3 times.

Ernesto De La Cruz + Sally
Campaign: The(Poisonous) Formula to Success: Ernesto is very insterested in Sally’s potions, which are said to be capable of affecting even the dead. He then orders 2 potions: one to make him more powerful, and one to slay… the creeps. At least that’s what he said to her.
Allies: Jumba, Yzma, Dr. Facilier.
Disk Name: A Dead-Raising Drink
Level Effect: +X Skill Power; +30% Improved Decaying to Ernesto and his allies.
Star Effect: Energy gains in Ernesto De La Cruz are now 20%(+20% per star) more efficient. Ernesto De La Cruz now receives 6%(+6% per star) less damage from enemies with a DoT effect. This effect is of 10%(+10% per star) less damage received from the Betrayed enemy.

Ernesto De La Cruz + Ursula
Campaign: Massive Boycott: Kermit heard from Miguel the story with Ernesto De La Cruz, and will do anything in his power to keep him out of the stage. In the end, Ernesto has to sing in secret villain clubs to keep himself entertained, but most villains think that “his” musics are just too upbeat. So, some villains make suggestions of the kind of music they would like to hear, and ironically singing “Remember Me” was the most suggested.
Allies: Scar, Jafar, Oogie Boogie.
Disk Name: The Dark Album
Level Effect: -X Skill Power to Blue Team enemies.
Star Effect: Ernesto gains +5%(+5% per Star) Skill Power whenever a debuff’s lenght is extended. Enemies have the length of their current debuffs extended by 1(+1 per star) second(s) whenever another debuff is applied to them. 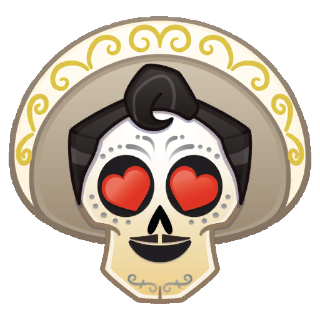 I’m willing to seize this concept because it’s so good.

Thank you Spark, I really appreciate it(just don’t kill me lol)! And where do you find these emojis? They are all amazing

And where do you find these emojis?

Makes sense, I guess you have the spark to do it

I guess you have the spark to do it

I remember people arguing in the replies over my Riley concept about bing bong, saying he can never come to the game cause “he’s forgotten” or smth but wouldn’t that apply for Ernesto.

I really hope that’s not the case because I AM IN LOVE with this concept. Good job!!!