This is my 4th concept regarding Fairy Godmother from Cinderella. I am aware that there are other people who already made a concept of her but I assure you that this one is different. 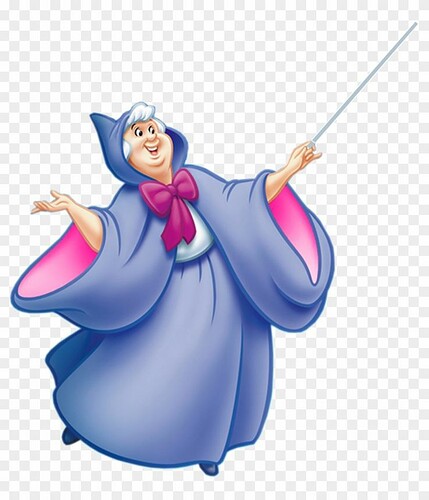 Description: She’s the dream fairy that all of us want to meet. Fairy Godmother is here to support her allies with her mystical powers and magic.
Quote: Bippity Boppity Boo!
Position: Back
Role: Support
Team Trial: Red
Collections: Support, Healers, Shields

Fairy Godmother heals all of her allies with Z HP and granting them 250 Energy.

In every 5 seconds, Fairy Godmother calls a stampede of forest animals, making the animals run through enemies, dealing X damage and sapping the enemy with the most skill power for 9 seconds.

When Fairy Godmother’s HP is below 50%, she shields herself in a pumpkin carriage, granting her a shield with Z HP that lasts for 7 seconds. When the shield is broken or the shield duration is over, the carriage goes through enemies, dealing X damage.

Every time an ally from Fairy Godmother’s team is K’O-ed, the attack and movement speed of allies is increased by 100% for 10 seconds.
This skill has a chance to fail for allies above level Y.

“Fairy Healing” now grants two stacks of Hardy to the ally with the least HP. The damage dealt by “Pumpkin Carriage” is increased by 50% and will also silence the enemy with the most energy for 12 seconds.

Campaign: Experienced Magicians
Description: Fairy Godmother and Merlin goes on a journey to study the magic and mysteries that the city holds.
Allies: Jafar, Bo Beep, and Gonzo
Disk: Mystique Alchemy
Effect: The duration of the buff of “Midnight Bell” is increased by +1 second/s.