HER BANNER IS COMING TOMORROW AND I’M READY! I mean, since Klee’s banner rerun is coming out tomorrow, I decided to post this concept of her! She’s my favorite character because E X P L O S I O N S and chaos

I hope you like this concept, feedback is appreciated (Also the skill icons are her talents icons in game, just to clarify.) 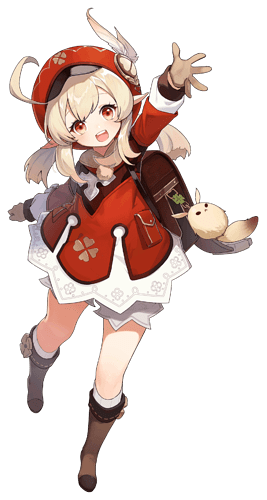 “Spark Knight Klee of the Knights of Favonius, reporting for duty! …There’s some more, but uh, I forgot. I’m not so good at remembering…”

Klee uses her expertise in Bombs to harm the enemies team without being put in solitary confinement!

Entrance: She comes running with some bombs dropping off her backpack.

Victory: She accommodates her backpack.

Defeat: She makes a sad expression.

Basic Attack: She throws a bomb at the enemy.

Klee can still attack when Sparks ‘n’ Splash is active.

If this attacks crits, it gives 70 energy to all allies.

Fantastic Damage
Every three basic attacks, Klee gains an “Explosive Spark.”
When Klee has an Explosive Spark, the cooldown of “Kabooom!” is reduced to 0, the attack knocks enemies back and the enemies are left with a burn, dealing X damage per second for 3 seconds.

When Klee is under the effect of “Sparks ‘n’ Splash”, allies regenerate 20 energy per second.

The energy gained by allies and energy lost for enemies are lower if they’re above X level.

Description: Slinky is left taking care of Klee, which wants to explode everything. Slinky is constantly using his shields to prevent any building damage.

Klee Basic Attacks and Skills can summon a Spark!

Klee and Lock, Shock and Barrel.