My birthday is today and I am now a teen! I like dark, eerie, and villainous characters. Which is why I chose to make the Beast. And no, it’s not Prince Adam. It is the villain of Over the Garden Wall, the best Cartoon Network show. He may be hard to see, but he is a silhouette in the show. 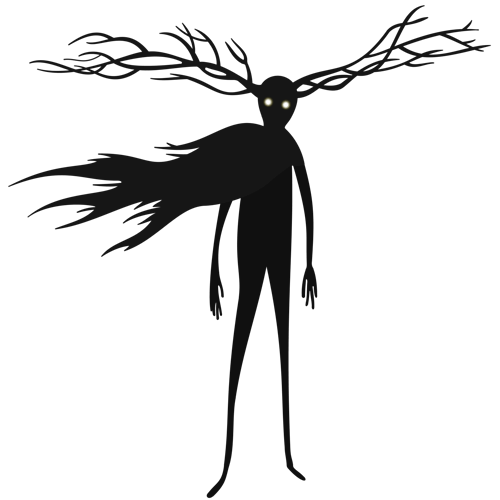 “Perhaps we better make a deal.”

The Beast is a back-line control hero

Entrance: The Beast walks into the battlefield

Victory: The Beast places his hand on his chest, singing baritone

K.O.: The Beast gasps in fear

Fantastic Damage
The Beast has an edelwood tree grow from under the enemy with the most skill power, tangling them up with the edelwood’s branches. The edelwood grants the enemy a shield in which only enemies could attack. When hit, the shield reveals a black, static sphere. The shield shields up to X HP. Any damage done to the shield is reduced by 50%

Green Skill: True Darkness
The Beast summons a darkness that surrounds all enemies individually, scaring each of them for 8 seconds

Blue Skill: Singing Encore
When the Beast reaches 0 HP, he revives, healing for X HP, gaining 80% attack speed for the rest of the battle

Purple Skill: Shadowed Silhouette
The Beast now gains 150 energy every time he scares an enemy or uses “Forest of Edelwood”

Red Skill: Edelwood’s Oil
The first time an enemy attacks the enemy under the effect of “Forest of Edelwood”, the enemy’s attack and movement speed are reduced by 60% for 6 seconds

This may fail against enemies above level Z

Happy Birthday! Pip’s birthday is later this month, he’ll be a newly-teen also

Happy birthday,Sir. Have a bowl,by the way. Throw you a bowl*