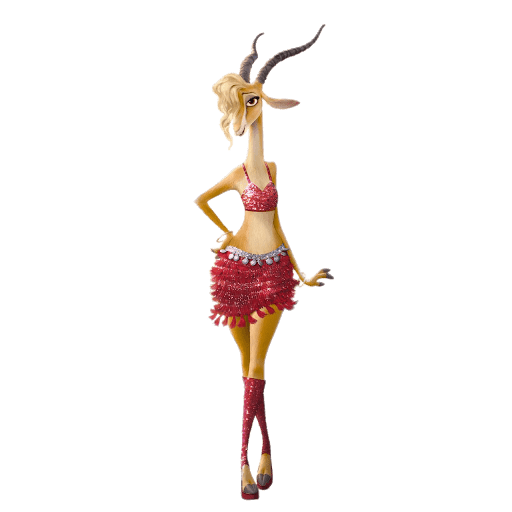 Entrance: Gazelle walks into the battlefield while holding on her hand microphone.
Victory: Screen becomes a bit darker, and then are released colourful lights focused on Gazelle which later starts singing.
Defeat: Gazelle looks traumatised and gets her head down from the sadness, her microphone falls into the ground.

Quote: “Please, give me back the Zootopia I love.”

White skill: Try Everything
Passive: Instead of doing basic attacks Gazelle sings, healing an ally with lowest HP for X HP. Gazelle is immune to all debuffs.

Active: Gazelle sings a song, healing all allies for X HP and removing from them all negative effects.

Green skill: Tiger Dancer
Tiger dancer appears on the battlefield, stands on the middle of the battlefield, protecting allies behind him by focusing all attacks to him. The Tiger has X HP. While Tiger is on battlefield allies are healed by X HP per second.

When KO’d Tiger can be summoned once again after 5 seconds from next use of ‘‘Try Everything’’.

The attack speed of charmed enemies is increased by 70% and their basic attacks do X bonus damage.

Red skill: Pop The Music
When Gazelle uses ‘‘Try everything’’ her and allies’ attack and movement speed increases by 60% for 10 seconds.

Allies are immune to debuffs for 3 seconds after use of ‘‘Try Everything’’.
Gazelle starts each battle with an additional 1000 energy.

The starting energy has a chance to fail if Gazelle is above level X.

Hardy stacks from '‘Try Everything’'

Judy Hopps - Music For The Creeps