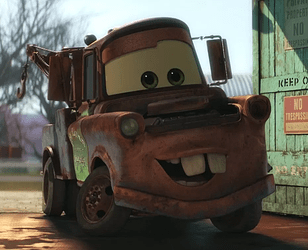 Mater honks his horn which gives enemies X and silences them.

giving each one X damage.

The pull foward are more effective towards enemies with a level of Y or lower.

Tow and Salvage takes an enemy’s buff and gives it to Mater.

Adds a shield for Mater that protects him from X damage

There, that ought to do it.