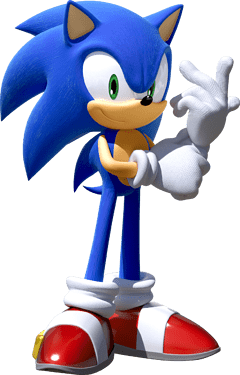 Sonic uses his super speed to trick the Creeps and speed up the fight.

Entrance: Sonic runs into his position.

Victory: Sonic makes a thumbs up at his allies.

Defeat: Sonic looks at the enemy team, crosses his arms and taps his foot.

Passive: Sonic will gain 1 stack of “Speed” for every 3 basic attacks, which boosts his speed by 10% for each stack he has.

Here’s what Sonic in his Super Sonic form looks like: 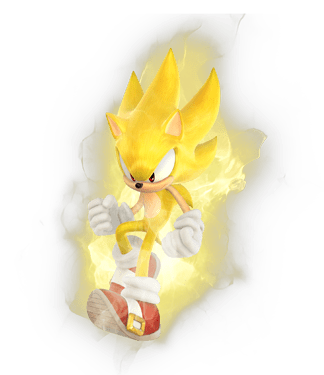 Sonic: Sonic will Spin Dash into the Most Wanted enemy and the 2 enemies with the lowest HP, dealing X damage and stunning them for 9 seconds.

Super Sonic: Super Sonic will release his Chaos Emeralds from his body, turning him back into regular Sonic, and the Chaos Emeralds will fly at the 3 enemies with the lowest HP, dealing X damage and silencing them for 8 seconds.

This move can only be used once per wave.

Every time Sonic does “You’re Too Slow!”, he will be immune to debuffs for 8 seconds.

“Sonic Style” in Super Sonic’s form will hit the 4 enemies with the lowest HP.

While Sonic is in his regular form, he will hit the 3 enemies with lowest HP (he will still attack the Most Wanted enemy.)

Campaign: Need for Speed
Campaign Story: Dash and Sonic have a foot race all around The City, but Creeps disturb the race!
Disk: Improved Speed Shoes

The max amount of “Speed” Sonic can have is now 12.

Campaign: You Won’t Regenerate
Campaign Story: Sonic and Ralph enter The City and find out that Creeps have taken the Candy Citizens from Sugar Rush, so Sonic and Ralph need to save them!
Disk: Arcade Cabinet

Basic attack deals 50% more damage. (When stars are added, damage dealt will go up by 10%.)

Isn’t it ironic how for a character like Sonic, the variable X is given. As in like, Sonic X. Anyways, yeah, this concept is awesome. I wish Disney had more speedsters honestly

There is a severe lack rn, lol

I used to have a Tails concept, and he was on Yellow. So I chose Yellow for Sonic.

Well, it IS a concept for Sonic the hedgehog, after all. /sarcasm

Why am I now getting that lol

Your forgettting a lot of things

No he didn’t, are you doing this out of jealousy/anger?

I mean he did say he didn’t rush a concept (which was his lightning mcqueen concept) and everyone told him he rushed it. He’s probably just mad that this concept is good.

Poll will close in 3 hours!

Not to be rude this concept is been rushed

Your forgettting a lot of things

Not to be rude this concept is been rushed

And this is coming from who exactly?

Your saying me taking 4 days to make one concept is rushing??

Then its not rushed.

No I thought he rushed it

You thought, read before saying this