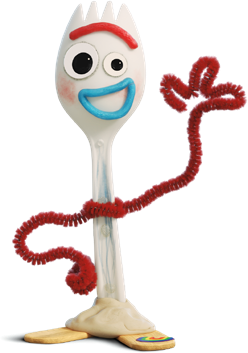 Asking himself big questions, Forky supports his allies on the battlefield, despite being made of trash.

Role: Tank
Position: Front
Trial Team: Blue
Entrance: Pops out of a nearby trash can
Victory: He leans back a bit, his eyes start to spin around, and he becomes happy
Defeat: He falls over and his eye pops out
Attack: Pokes an enemy

White Skill: Forky Asks A Question
Forky stops and starts to think, making himself invincible for 7 seconds and distracting enemies while he is invincible. Distracted enemies will prefer to target Forky. Forky heals his allies for 100% of the damage he would’ve received.

Green Skill: Poke an Eye Out (Normal Damage)
Every 7 seconds, when Forky is damaged by a melee attack, his eye pops out and sticks onto the closest enemy. He goes to get it back and he pulls it off the enemy, dealing X damage and reducing their basic damage by Z for the rest of the wave. He then puts it back on his face, healing himself X HP.

Blue Skill: Trashy Home
When Forky falls below 25% of his Max HP, he hides in a trash can, granting himself a reinforced shield that has X HP and doesn’t expire.

Reinforced shields cannot be removed, stolen or bypassed, and they ignore up to 50 Armor Negation and Reality Negation against them.

The shield granted by this skill also takes 50% reduced damage from all sources.

Forky cannot move or preform basic attacks and skills while this shield is active.

Purple Skill: Questioning Reality
Each time an enemy is distracted by Forky or his allies, Forky gains X armor and X reality for the rest of the wave.

While Forky is in his shield from “Trashy Home”, his allies heal 25% of the Shield’s HP per second while the skill is active.

The healing is reduced on allies above level Z.

Forky-Fear
No Worries
Immunity to Fatigue
+Z Basic Damage
+When Forky or his allies receive a shield, they gain Z Skill Power for the rest of the wave.
• Forky is immune to receiving Fatigue Stacks and has a 15% (+15 per star level) to absorb it from an ally)

Thought someone made a Basil concept for a minute

I think you meant to put distracting…

Unless Forky is practicing Social Distancing

Yes, I meant to put that!