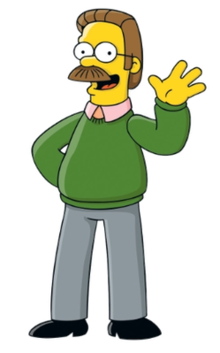 , Support, Backline.
Team Trials: Yellow
Quote: “What can I ding dong diddly do for ya?”
Bio: Instead of Ned doing his usual, he is gonna do a friendly battle, or so he thinks it’s a friendly battle.
Entrance:

White Skill: Here Come Sandwiches.
Ned pulls out a tray of sandwiches and gives them away, healing X% of health.

Green Skill: Hidely Ho Neighbor!
Ned will wave at an enemy, taunting them for 3 seconds.

Blue Skill: Knowledge is Power.
Ned will throw 3 books at an enemy, dealing X damage and stunning the enemy for Y seconds.

Purple Skill: Full of Vitamin C.
Ned’s White Skill will be able to do 50% more healing.

Red Skill: Hardcovers.
Ned’s Blue Skill will be able to do 75% more damage and stun for Y more seconds.

Friendship 2: Ned and Huey, Dewey, And Louie.
Campaign Story: Be Like The Cool Kids. “Huey, Dewey and Louie are trying to teach Ned how to skateboard, but some trouble shows up at the skateboard rink.”
Disk: Cool Sandwiches.
Ned’s sandwiches will be taken more often by allies with low health.

If you liked this, somehow, that’s good.

This is a really good concept. But I would like to point out two things that you should fix, that is purely a discrepancy of wording.

Ned’s White Skill will be able to do x2 more healing.

Ned’s Blue Skill will be able to do more damage

The rest of the concept is written in an easy to understand way, that works like the skills of the characters in the game. So to fix these you should put a %.
Like this:
Ned’s White skill now does 100% more healing