Hoo Hoo to you too! (Contest Submission)

This is my second submission for @Scarlet_Captain’s 2nd Grand Concept Contest! Yet again this doesn’t have skill icons because it’s too stressful, I’m sorry 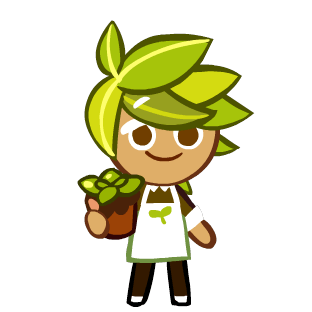 Role: Support
Position: Back
Trial Team: Red
Entrance: A flower pot is at his position. Herb cookie walks next to it, waters it, and picks it up.
Victory: Waves at the camera
Defeat: Gets knocked down and drops flower pot.
Attack: See Passive

Active: Herb Cookie turns the ground into a wonderful little garden for 10 seconds, cleansing allies of all active debuffs and instantly healing allies X HP. Allies also heal Y HP per second while standing near the sprouts in the garden. The battlefield also begins to rain while the garden is in place, dealing X damage per second to all enemies and reducing their armor by Z.

Green Skill: Sun-Kissed Seedling
Herb Cookie plants a Sun-Kissed Herb Seedling in front of the ally with the most HP, granting them a shield that has X HP and 4 stacks of “Hardy”. When the shield is destroyed, the ally gains 3 stacks of “Strength” for 10 seconds.

Herb Cookie gains Z basic damage each time a stack of “Hardy” is consumed. Herb keeps 50% of this buff when carried from wave to wave.

Converting Basic Damage and Skill Power debuffs has a chance to fail if the debuff came from enemies above level Z.

Herb Cookie-Wall-E
Campaign: Rusty Trouble
Wall-E has been having trouble supporting the community garden due to the harsh rain, and Herb Cookie wants to help.

Herb Cookie-Sadness
Campaign: Rain on my Parade
Sadness’s rain clouds have been having a negative effect on Herb Cookie’s plants. Herb Cookie tries to make her happy