How should I improve my team?

Hello! I’ve been playing Disney heroes almost since its release, and I’ve always just worked on the heroes that I like or those that I’ve found to be strongest, but I’ve been wanting to create a team with stronger chemistry recently. Currently, the team i have is Zeus, Shego, Pacha, Kermit, and Ian Lightfoot. I want to improve this team to get farther in the campaign and hopefully reach challenger arena soon. Any suggestions about how i could create a better team is greatly appreciated!! 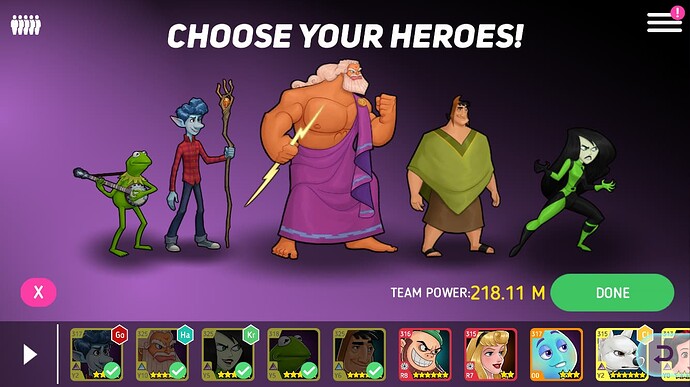 Well, my guildmates usually have Pocahontas on their Zeus team, since she gives skill power to blue team allies. Mad Hatter is also a must, if you’re up against an enemy that can hex, freeze, or charm your guys, because his red skill makes his allies immune for the first five seconds. I would also recommend Sisu, with the Mushu disc, in case you’re up against someone with a reflect.

(Tron, with a fully powered Kevin disc is also a good reflect counter, but Zeus will usually strike before he does.)

Most Shego teams have Jim Hawkins on them, as his green skill gives an energy boost. I personally also like to have King Louie with her, since the banana peels from the Animal disc can give the enemy team a hard time at the start.

Ok, thanks for the tips! Do you think i should pick either Zeus or shego (only have one on my team) or keep both of them and try to work with that?

My reccomend team for you

Of course, you could always replace some of these heroes, but this is most affective

Ok, thanks for the help!