I hear a voice (An unlikely concept) 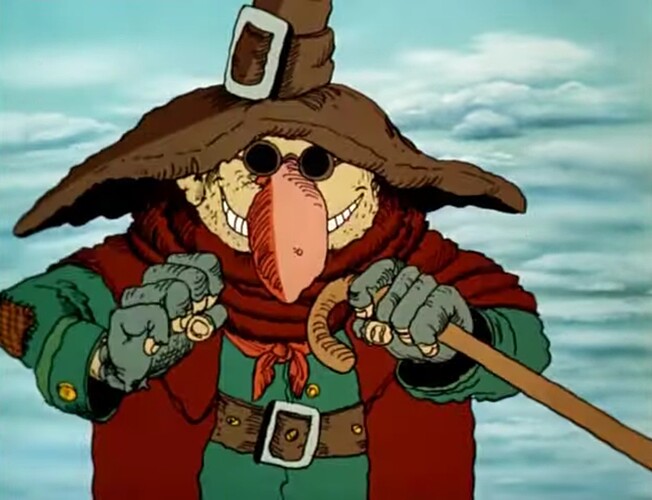 Blind Pew1410×1080 184 KB
Desc: And old pirate, old friend of Flint’s. Cunning and greedy. Will do anything for money. Atrocious temper. Not married.
Source: Treasure Island (1988)
“It’s okay, Billy, stay where you are. I can’t see you but I can hear your fingers trembling.”

Entrance: walks at the arena while checking it with his cane.

Defeat: rolls his cane into a knot.

Tragic story of Bobby1500×1500 1.02 MB
Passive: Blind Pew starts the match Blinded. This debuff does not expire, but can be removed.
Instead of dealing damage with his basic attack, Blind Pew listens to enemy movements, gaining Energy and giving all allies in a small area nearby “Precise” for 4 seconds.
Active: Blind Pew hits a drum three times, dealing X damage with each hit and increasing his allies’ attack speed by 80% for 6 seconds.

Pull your hand1500×1500 801 KB
After 8 seconds of combat, Blind Pew gives a black spot to the Most Wanted enemy. This enemy gets Shattered till the end of the wave.
If this debuff gets removed, the enemy receives 100% of their max HP as true damage.
Shatter apply has a chance to fail against enemies above level X.

Search for papers1500×1500 721 KB
Blind Pew points at the enemy team, studying them for 5 seconds. Blind Pew and his allies receive 50 Energy every time they damage a studied enemy.
Bonus Energy has a chance to fail when attacking enemies above level X.

Red skill: The job is done

The job is done1500×1500 1.15 MB
When Blind Pew activates “Pull your hand”, the cooldown for “Search for papers” gets reduced by 3 seconds till the end of the wave.
Blind Pew gives X Basic Damage to his allies when the enemy marked with “Pull your hand” gets KO’d.
+X Skill Power
+X Evasion
+X damage to “Tragic story of Bobby”

Wait hold up. Isn’t that from Treasure Planet 1980?

Nope, this Blind Pew was taken from Treasure Island 1988. Or 1986, as it was separated into two parts.

Exactly, as they are from the same series of the same studio.