It has been almost 2 weeks since I’ve posted a concept. I’ve been busy with stuff I won’t reveal yet. I’ve made an unlikely concept. She is chinese, overpowered in a way, and an interpol officer. She’s… drumroll please… CHUN LI! This concept of her is mainly based on Street Fighters II Turbo, so please don’t complain about moves she’s done in other games. I’m not aware of them. I have used Chun Li in the game (SS2T) before. 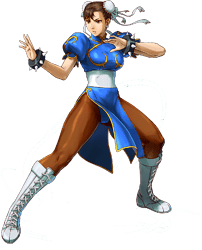 “I am the strongest woman in the world!”

Victory: Chun Li raises her hands in the air and jumps in excitement

K.O.: Chun Li crosses her arms and looks down, furious

Normal Damage
Chun Li stays in place and kicks around rapidly, blocking any projectiles against her until she runs out of energy. If an enemy runs into Chun Li while she is performing “Lightning Kick”, Chun Li deals X damage to them every time she kicks them

Green Skill: Power Kick
Chun Li gains X skill power for every stack of 50 energy that she has

Normal Damage
Chun Li jumps up and stomps on an enemy, dealing X damage, stunning them for 6 seconds

Purple Skill: Rapid Kicking
Chun Li gains 8% attack speed for the rest of the wave whenever she performs a basic attack or “Stomp Kick”

No because I don’t know them

How about Napstablook from undertale

I could do that one