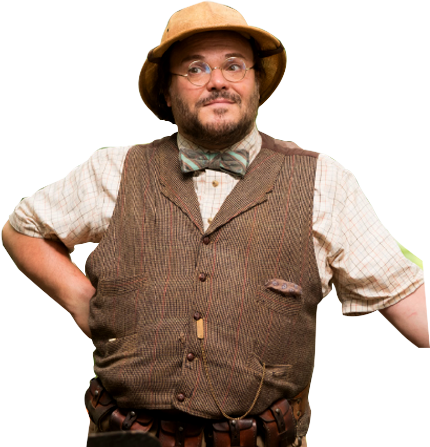 “No! I’m an overweight middle-aged man.”

The most popular girl in high school, now the curvy genius of Jumanji. Professor Shelly Oberon uses his map reading and geometry skills on the field.

Entrance: Falls from the sky

Defeat: Stomps his foot and crosses his arms.

Passive: Instead of having a Basic Attack, Shelly looks at his map, studying a random enemy for 4 seconds.

Active: Shelly crumpled up the map and throws it at the most wanted enemy. This deals X Damage and studies them for 11 seconds.

The study can fail against enemies above level X.

Shelly runs through the battlefield, followed by a hippopotamus. This deals X Damage to all enemies.

Whenever Shelly or an ally receives damage over time, it is switched to heal over time for the same duration. Whenever Shelly falls below 50% HP, all enemies are studied for 7 seconds.

The DOT switch can fail against allies above level X.

Professor Sheldon “Shelly” Oberon and Baloo
Campaign: Tales of Adventure
Disk: Spin For Adventure- Shelly is immune to the first debuff plus 1 debuff per star.
+X HP
Description: Shelly and Baloo get lost in the city.
Allies: Dash, EVE, Alice