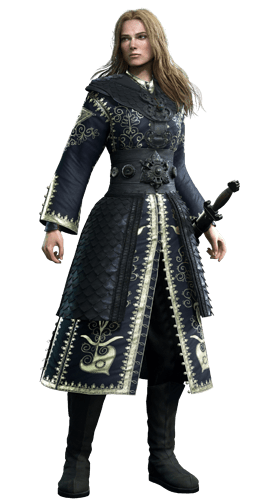 Elizabeth is a front-line control hero

Entrance: Elizabeth walks into the battlefield

Victory: Elizabeth raises her fist in the air

K.O.: Elizabeth puts the back of her hand on her forehead and falls back

White Skill: Hoist the Colors
Elizabeth raises her sword in the air and yells, granting all allies 100% attack speed and 10 Tenacity

Blue Skill: Drink Up Me ‘Earties

Normal Damage
Elizabeth takes out a bottle of rum and throws it at an enemy, stunning them for 6 seconds, dealing X damage

Surrounding enemies’ are dealt X damage, and their attack speed and movement speed are slowed by 40% for 6 seconds

Stun and slow may fail against enemies above level Z

Purple Skill: Half Seas Over
Enemies affected by “Drink Up Me ‘Earties” lose X armor

The concept is a bit all over the place and I can’t really decide what she wants to be. Is she a support? A tank? A control?

Also her white is copied and pasted from animal and woody.

Hmm… I’ll add something else instead to the white skill