King of the Monsters | Concept

This is probably the most difficult concept i’ve made so far, took almost a month to made it but i think i’m pretty okay with the result, anyways feedbacks are always appreciated. 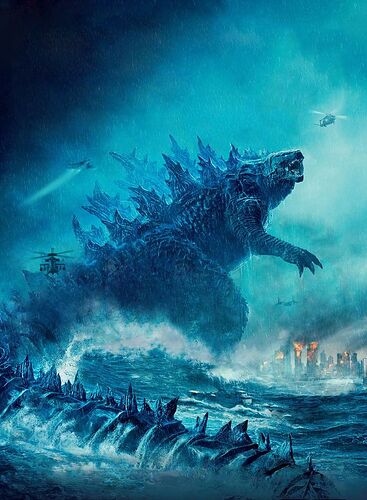 As a king of the monsters, Godzilla will never stop at his foes who dares to oppose him or at anything who dares to destroy nature.

Entrance: Godzilla walks to his position then roars at enemies.

Basic Attack: Godzilla stomps the ground which creates a crack that hits enemies.

Victory: Godzilla roars at the sky.

Defeat: Godzilla roars weakly as he falls to the ground.

In his Burning Form, Godzilla releases a thermonuclear wave to all enemies three times, dealing X damage to them each hit and removes all buffs from them.

Green Skill: King of the Monsters
(Fantastic Damage)
After Godzilla uses “Atomic Breath”, Godzilla roars at enemies, silencing them and reduces their basic damage by X. If they are already disabled, they are dealt X damage.

Red Skill: Titan Saviour
When Godzilla has reaches 1 HP, has activates “Burning Form”, but has a remaining ally, Godzilla turns back to his original form and regenerates for 50% of his HP, then activates “King of the Monsters”.

When Godzilla is KO’d, the remaining allies gains the last buffs he has and heals for X HP.

Btw, for how much time? Is it the same length as the ally’s invincible?

Why does this make me laugh so hard??

Btw, for how much time? Is it the same length as the ally’s invincible?

no one who dares oposing him

If alice would battle godzila he smash her to death

That should be the next Godzilla movie.

Rick Sanchez: allow me to introduce myself