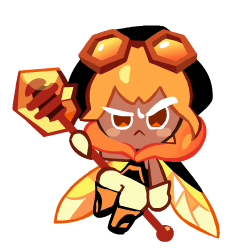 Amber Sugar Cookie will not hesitate to start from scratch if his abode deviates in even the slightest of measurements and cannot stand to see his home becoming victim to wear and tear.

Entrance: Flies in
Victory: Wears her goggles on and flies away
Defeat: Uses the Honeydipper Staff and knocks herself

Basic Attack: Smashes the enemy with her honeydipper staff, dealing X damage and a stack of Hunny to the enemy

White Skill: Honey Crystals
Knocks 2 random enemies with his honeydipper staff, stunning them them and 5 stacks of Hunny
This increases his attack by X

Green Skill: Take This
If an ally falls below 35%, increases the attack of all allies and heals for 50% Max Health of all allies
He only can do this once per battle

Blue Skill: No, not this! You sting
Active: Amber Sugar Cookie calls up Humble Bumble to sting the backmost enemy for 3 seconds, Dealing X damage and 2 stacks of Hunny 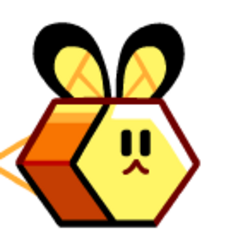 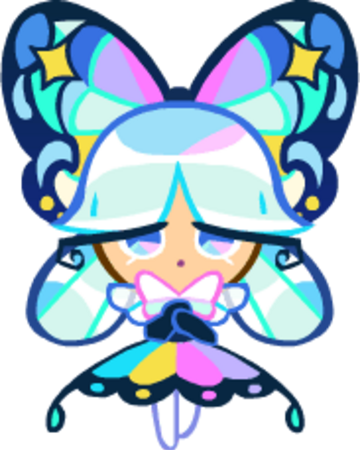 Within this mysterious greenhouse lies the Labyrinth of Remembrance and its watcher, Sugar Glass Cookie. With transparent wings delicately stitched together with sugar glass, the caretaker floats quietly through the air and tends to the memories blooming inside the greenhouse’s flowers.

Entrance: Flies in
Victory: Smiles for a second
Defeat: Turns into a crystal

Green Skill: Sharing your memories
At the start of battle, increases all allies evasion, speed, Crit chance, armor and attack by X for 7 seconds

Blue Skill: What memories await
When an ally is using their White Skill, increase their speed by X if it’s a support. If the ally isn’t a support, increases their attack by X

Purple Skill: The last one wilted
Once per battle, Whenever Sugar Glass Cookie is Ko’d, Calls Nectar Delight and heals for X HP and turns a random enemy into a Memory Flower for 5 seconds 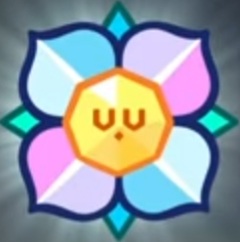 Red Skill: Complete the Stained Glass
If an Enemy is turned into a flower, increases the speed by X and decreases their speed by X

here is what’s wrong (with the first concept)

Yes
You are right
I quite love that game

“Hunny” is already used by Pooh.

Who say you cant use other effect
Well, no way i’m putting freeze effect

Now ya get me

Who say you cant use other effect

I suppose there’s not really an explicit rule that says you can’t, but considering how Hunny is meant to be unique to Pooh, I don’t necessarily think you should.