So, like I said in my Chicken little and Kirby concept, I decided to create my ideas about more concepts of lesser known Disney characters. So let’s start with a completely forgotten character: 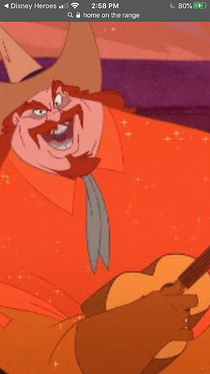 Entrance: Slim rides his buffalo to battlefield
Victory: Slim plays his guitar
Defeat: Slim gets furious and throws his guitar to the ground

Basic attack: Slim plays his guitar and hits an enemy with the song

White skill-“Yodel-Adle-Eedle-idle-oo”: Slim yodels, making a hypnotized cow go through enemies (similarly to Nick throwing a popsicle to a lemming). The cow stuns enemies and does normal damage.

Blue skill-“Explosive Fight”: Slim throws dynamite to the enemy in the back, doing fantastic damage and slowly taking away damage. 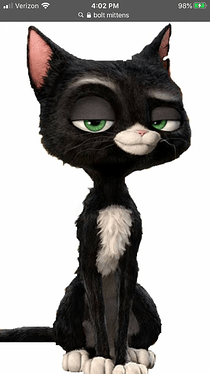 Basic attack: Mittens throws pieces of food at an enemy

White skill-“Pigeon Flock”: A flock of pigeons come by to hit all enemies and stunning them

Blue skill-“Yarn Play”: Mittens plays with a ball of yarn. This gives allies increased attack speed for a short time.

Purple Skill-“Food for Protection”: Every time Mittens uses her white skill, the ally with the least HP get shielded

Next, the last concept in this topic. This character happens to be in one of the straight to dvd Disney movies. So, understandable If you don’t now her

Hero: Dixie and Zelda (The Fox and the Hound 2) 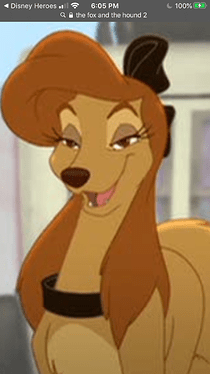 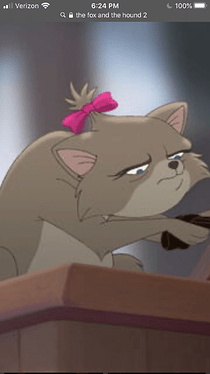 Role: Support
Position: Back
Team: Red
“There ain’t nothing I can do turn his head and excite him. Sometimes I swear I just…wanna bite him!”

Green skill-“Before the Show”: Dixie gives Zelda a peanut butter jar, she then throws it to the closest enemy and doing fantastic damage and slowing them down

Blue skill-“Good Doggie, No Bone”: Dixie and Zelda do a dance (the same dance in “good doggie, no bone song if you’ve seen it before) and heals all allies while blinding enemies because of the colorful lights

Alright I’m done now. Hopefully you liked these concepts. I’m thinking about making a part two sooner or later. Hopefully you all try to remember these characters and their movies.

Love these! I would like to see more of these in the future

I love these ideas!

Did you made concept on bolt? If not then you should do on him since you made allready with mittens

Bolt is a more well known character, I assume these are more of side characters from lesser know/ forgotten movies or shows, would be cool to see bolt in game though!

Oh, man! I am definitely going to make concepts with heroes nobody made before. It’s just shame that so interesting characters are forgotten