So currently on S1 there is a Blue Team Invasion with a focus on Jessie, K&S and Jafar. Blue team has the fewest heroes as of 1.17.10 at 31. When you get a Hero Power Up you get a choice of +5 to 3 heroes and a 4th to +1 for all of Blue Team. Essentially a +1 to the team you use assuming you use a team entirely of that color heroes. This may be akin to bad luck of the draw on my end but it is still an issue that I feel may apply to other players and add some inconsistency. Currently I have had 48 power ups used on my team including 2 of the featured heroes versus 56 on the whole team. Perhaps this is an isolated issue but I think this weekly game mode could use some sprucing up and I have a couple ideas as to how.

The first is simply give more choices for the boosts. Even one possibly two slots on this would make such a big difference in the rate of useful focused power ups in comparison to the less useful team power ups. Another option is make one of the slots contain a featured hero everytime. This way players are incentivized to use those 3 heroes as they are guarenteed to be stronger than usual instead of starting with a simple +3 or what have you. The most thematically sound option is too remove the other teams heroes from being targets of a power up. This way you are both limiting the pool of heroes as the game mode seems to intend players to play and you make those heroes on average stronger than its current implementation.

Let me know what people think of these changes. Are these sound ideas, have you had the same unlucky streaks, are players happy with the state of invasion as is? Let’s have a discussion. 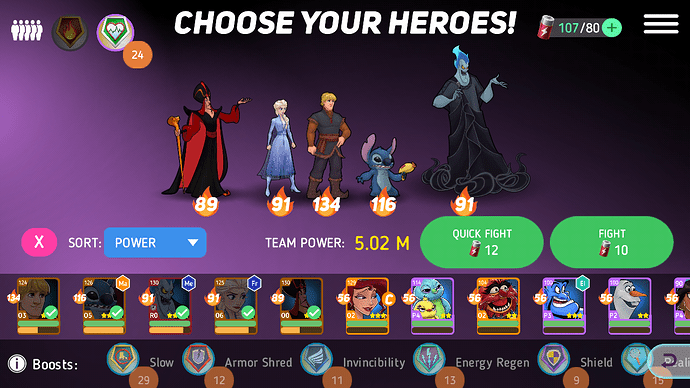 I would say that unless you have a specific character that needs more boosts than anybody else on your team, it is always mathematically superior to choose +1 for all instead of choosing +5 for anyone. So, I don’t see a problem.

For those who don’t understand the math: if you choose the +5 option, you have gained a total of 5 points worth of boosts for your team (5 for one guy, 0 for everyone else). If you choose the +1 option, your team of 5 has also gotten 5 points worth of boosts (+1 for each of the 5 guys). So they sound like they’re equal, but they’re not. Here’s why:

In addition to helping out the 5 guys on your team, you also help everyone else of that color. You might think there’s no reason to care about anyone but your main 5 but there is. First, some characters are better against mama bots than they are in breaker fights. You might have two slightly different teams to use. The +1 option helps more when you have more than 5 characters to use, and that could happen in this sort of situation. Also some characters work better against others even in the breaker fights, so it’s nice to have options, meaning other characters that were improved by the +1 option that you would not improve if using just +5s.

Also, the +1 option helps combat the danger of randomness. Maybe your favorite character shows up very rarely as a +5 option? Well, that’s never a problem if you stick to +1 boosts only. Everyone is improved equally.

I suppose that makes sense. It just bugged me about the inconsistency of the picks for heroes but if you look at it from your perspective it starts to make more sense. I’ll try that out for next week’s invasion and see how that plays out.

One of the best things about Invasion is that players are encouraged to use teams with boosted characters that maybe are not in the regular rotation due to the randomness of who get the boost. This can create some fun, surprising dynamics. I had never really used Zurg until he was boosted +56 and I saw the potential; likewise playing with a boostmode Beast I saw his ceiling. The randomness keeps it fresh and dynamic.
I do think that assigning Power-Ups need to be tweaked. It adds waaaaaay too much RNG into if that weeks invasion will be personally successful. Reminds me very much of drafting cards- if you get lucky pulls then you will do better than others (Pulling 2 boosts for Elsa & 6 for Felix against someone who pulled 8 Elsa boosts: one team will get farther than the other).

I like requiring one choice to be one of the 3x featured, eliminating off color boosts, adding a 4th option, having a dynamic table with a weighted average towards existing power up’s to help maintain momentum(65% will be for chars with above mean # of boosts, 25% for that color team, 10% unboosted/off-color).

I am dubious over just +1 to the whole team. I get why it’s a safe bet but:
If you don’t focus on just a few heroes ; how do you keep up with the scaling?
If you only get 40 power-ups: is having the whole blue team at +40 better than having a +65 Elsa/D&B/K&S? Personally I don’t find Rex/vanellope worthwhile even with a bunch of levels; especially not at the expense of Rajah having enough HP to tank a 150 Mama or Elsa to wipe the backline with a jacked up blizzard.

Case of Jaffar: Two choices
A) options to choose between 2 mediocre level charms in Hatter/Jaffar
Or
B) Just a really strong whirling Dervish. Forget the charm/hourglass add-ons; one good skill pushed to volume 11 can brute force past a hurdle but it’s an insurmountable wall if the AI Gonzo/Baymax wipes you out first turn.

Case of: Bo Peep, there is a point where she can blow through breakers in 10 sec or less, but against higher level mamabots her HP can’t keep up and she gets one-shotted, so you will need a back-up for later in the week: BUT if you don’t focus on her at the start you will be (at least) a day behind where you could have been which makes you miss out on participating with the rest of your guilds bots. +40 Bo on Wed is way more useful then +40 on Friday evening.

We all love options but lets limit the variables: Am I really going to be using 20+ different characters per invasion? I get having 3 slightly different teams for the 3different Invasion modes; still probably not cracking open even a dozen different characters??
Maybe if ALL of your characters are maxxed out and top level it wouldn’t matter but for anyone else; I really don’t see the maths for going broad. There is no maths for getting lucky either though which is why having a better way of assigning boosts would be a great improvement to Invasion.

“If you don’t focus on just a few heroes, how do you keep up with the scaling?”

As I said, unless there are people in your team of 5 that need more boosts than others, it is exactly the same with using the +1s.

For example, in my current blue team, I use Bo Peep, Megara, Jafar, Bunny&Ducky, and Animal. Even though only three of these are O7 (still working on Meg and Animal), I see no reason to boost one character more than another.

So then suppose I have 5 boosts to spend. If I use those 5 on +1 boosts for everyone, then all five of my heroes get 5 points of boosts (+1 each times 5). On the other hand, if I spend my boosts on the +5 boosts instead, then (assuming I’m lucky enough to get to choose a different one of my 5 heroes to boost each time), then I can give each of my five heroes a +5 boost. So the end result is exactly the same except that now the heroes below my top 5 are not boosted at all.

Again, if you have some particular reason to boost one hero more than another, then by all means, do so. But I think for most people, that’s not the case.