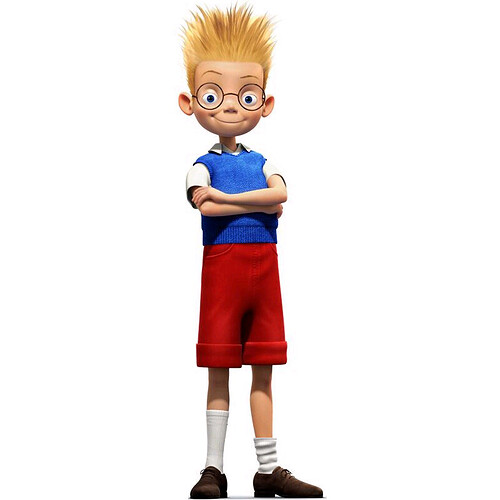 Desciription: Lewis may seem young, but with his brilliant mind, and his memory machine, he’ll be able to support his allies.

Basic Attack: Lewis pulls out a welding torch, and fires it in front of him, dealing X damage. At P0, it does continuous damage after Luis is finished. At P2, Lewis also throws a random tool at the opponent when finished.

Walking Animation: Lewis just walks forwards like a normal person. He does drag is wagon around with him as well.

Entrance Animation: Lewis walks in with his memory machine in his wagon he brings along.

Winning Pose: Lewis puts the hat on from his memory machine and he enters a code. Then, a memory pops up on the screen.

Losing Pose: Lewis does the same thing as his winning pose but instead of showing a memory, the machine malfunctions, Lewis ducks so he doesn’t get hurt. The fan the flys off and the soda in the bottle explodes, flinging soda all over the place. Then he disappears.

Skills:
Fantastic Damage.
White Skill: Welcome To The Future. Wilbur comes in with the time machine and picks up an opponent. He then teleports them into the future and they disappear for 5 seconds, like Mr. Big and Koslov’s blue skill. Then, after the 5 seconds are up, the enemy drops down from the sky, having X damage dealt to them. They are also stunned for 5 seconds. When Lewis is at B0, the stun time gets increased to 8 seconds. 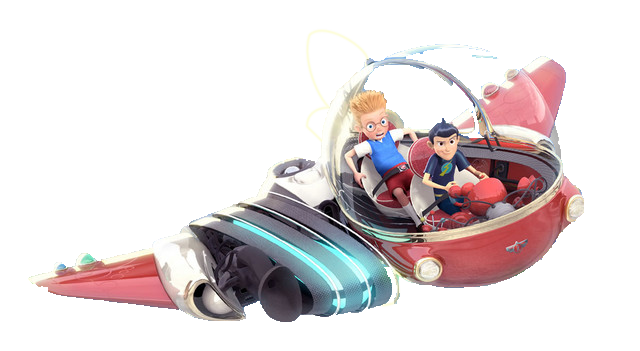 Green Skill: Good Memory. Lewis take the helmet from his machine, and walks to the furthest ally. He then puts the helmet on them, and types in a random date of a good memory. The machine in his wagon then sparks to life and shows a good memory to them, giving them one of these random, positive effects:
A sheild with X HP.
A X energy boost.
Heal Over Time X HP for 5 seconds.
Reflect for 10 seconds.
Invincible for 8 seconds.

Blue Skill: Bad Memories. Lewis throws the helmet at the farthest enemy, and like Woody’s green move, it pulls them forwards, stunning them for 5 seconds. Then, Lewis inputs a certain number on the keypad while the enemy is stunned. This plays a bad memory for them, giving them one of these random, negative effects:
It increases the stun time to 10.
It deals continuous damage of X HP for 5 seconds.
Charms them from 10 seconds.
They get Scare for 7 seconds.
They get silenced for 7 seconds.

Normal Damage.
Purple Skill: Malfunction. After Lewis is KO’D, the fan that flys off his machine goes through the opponents side, dealing X damage. At P3, the soda that sprays everywhere also blinds enemies for 8 seconds before wearing off. The blind effect has a chance to fail against enemies at X level.

Red Skill: Multitasking Genius. Lewis has a 55% chance to dodge all attacks when preforming any of his moves.

Friendship 1:
Lewis & Hiro.
Campaign: Young Geniuses. The two young boys meet. They learn about each other and all the great things they invented. At first, both think the other might be lying. But when they take each other to their workshops, they suddenly realize that the other wasn’t lying.
Level: 168.
Disk: Strange Invention.
Disk Memory: Lewis’ Green Skill, “Good Memory”, now has a chance to add this buff: Makes then Invisible for 10 seconds.
Disk Power: Z Damage Buff, Z HP Buff.
Allies: Gizmoduck, Gadget, Tron

Friendship 2:
Lewis & The Rocketeer.
Campaign: Impressive Tech. The Rocketeer had seen the technology from the 13 year old. He talks to him and tells him how he should meet his best friend, Peeve. Lewis says he would like that, but he’s also impressed by the jetpack. He asks if he could maybe take a look at it later, and Cliff (yeah, his real name is Cliff) agrees.
Level: 128.
Disk: Intriguing Blueprints.
Disk Memory: Lewis’ Blue Skill, “Bad Memories” now has a chance to add this debuff:
Distracts them for 10 seconds.
Disk Power: Z evasion, Z Damage buff.
Allies: Baymax, Wall-E, Emperor Zurg.
Concept board next? Yay or Nay?

Another good concept. I’m really excited to see what you do next!