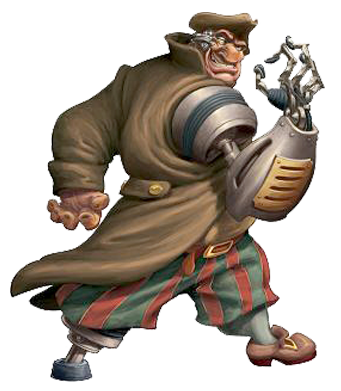 John Silver is a cyborg pirate captain that has devoted his life to piracy and treasure. He is ruthless and will do anything for some treasure. But, he has a soft spot for his pal Jimbo (James Hawkins) as his father figure.

“You got the makings of greatness in you, but you gotta take the helm and chart your own course! Stick to it, no matter the squalls! And when the time comes, you’ll get the chance to really test the cut of your sails and show what you’re made of!”

Basic Attack: he would switch his robotic hand into a sword and slice at the enemy side to side

Entrance: he jumps down from a flying long boat, fixes his hat, and goes into a fighting position.

Victory: he happily plays with some gold and puts it in his hat to save for later

Defeat: his cybernetic leg breaks, causing him to fall over and to hold onto his broken leg.

He switches his cybernetic hand into a flintlock and shoots the nearest enemy, dealing x hp

Green Skill: Family Recipe
He tries a spoonful of his soup out from his cooking pot which heals him x hp, then gives a bowl to the most damaged hero and heals them by half of what he healed for

He furiously tries to open the spherical treasure map with his hands and cybernetics but cant, giving him an attack boost. So he throws it at the most Central enemy, dealing x hp.

Purple Skill: Cyborg Vision
All of John Silver’s attacks are more accurate and have a x% increase in damage and have a chance of critical hitting the enemy

Maybea possible secondary skin could be his cooking outfit from the kitchen. Possibly unlockable by either completing the Cook Off campaign or with a certain amount of coins from any of the shops.

Both he and Treasure Planet are so massively underrepresented. I’m really happy that PerBlue finally added a character from the movie recently with Captain Amelia since the game launched two years ago and I can’t wait for Silver and the other characters from the same movie such as Jim Hawkins, Dr. Doppler, B.E.N., Scroop, and Morph (if not, he should be paired with Jim), to be included in the near future. Since this is an officially-licensed Disney fan service game, anything’s possible.

Yeah. Not only would that make so much sense, but that would definitely be awesome as well.

Your comment was off-topic for a concept. You’re welcome to praise TP but you need to remember that there’s a time and place for those sorts of comments. If you had talked about John Silver and the concept it would have been ok but instead you made it about your opinions which aren’t right for this thread.

That makes no sense to me. The guidelines for flagging and what can and can’t be allowed to say on certain topics need to be reworked because it seems pretty unfair, ridiculous, and even biased.