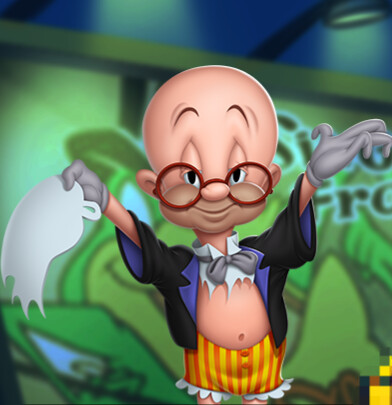 This corny concertist may not look slick and he barely keeps his act together, but he’s in the show biz nonetheless. In battle, his crazy antics are sure to heep his enemies down.

Entrance: Shines a spotlight while he walks in dramatically
Victory: Receives a round of applause
Defeat: His pants fall off
Basic Attack: Pulls a lever and a bush falls off next to an enemy, then a horn blows out, dealing damage and decrease their healing received by X

Sends a goose at the front-line enemy, then the goose slaps all enemies, dealing damage to all enemies , decreasing their healing received by X and stunning them.

Calls up baby Daffy Duck to peck at a random enemy, dealing damage to them, stealing 25% energy and decreasing their healing received.

Blue Skill: Show Biz Shuffle
Takes his sheet out and gets shocked, increasing attack and speed to all allies and gaining 60% energy.

Red Skill: Scene Partner
If an enemy is immune to an attack or dodged an attack, deals an undodgeable, an attack that can’t be immune of A Haunting Wefwain. Whenever an ally hits an enemy that the enemy’s HP was lower than 50% HP, increases the ally’s speed for the rest of the battle.

And + He was based on the Cartoon, A Corny Concreto

Changes to the skill “A Huanting Wefwain”