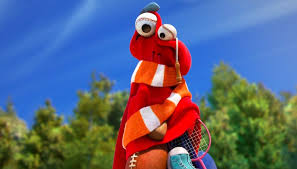 Source: Lou
Lou uses themselves to help their team win.
" °…°"

Entrance: Lou swings in from the top of the screen.
Basic: Read passive
Victory: Lou swings their jump rope (arms) in the air.
Defeat: Lou gets blown away.

Passive: Lou takes 70% less damage while they have full energy.
Active: Lou hits a enemy with;

(At the end of the skill Lou receives a shield for 5.0 seconds.

Green: team play
At the beginning of each wave Lou will apply “found” to all allies.

(Found gives every ally 60% of their make HP if they are below it. If they are higher the that they revive a shield for 9.0 seconds. )

Blue: Taken apart.
If Lou is defeated they will spread their items between all allies healing them Y HP and cursing enemies for X time.

Purple: Sharing with others
If Lou falls below 20% of their max HP they will give them self invincibility for 4.2 seconds.

This is a submission for @Imagineer_V’s contest. I hope you like it!

Thank you for submitting! SO many great concepts (like over 10 submissions and we are only on day one and I am so shocked it is amazing)

That does not matter. There can be repeats.