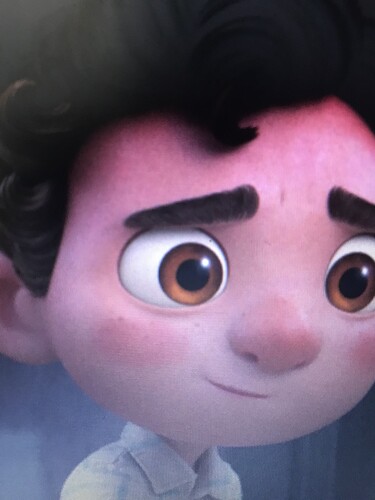 image3024×4032 3.34 MB
Luca is a kind sea monster. He is very curious, especially when it comes the surface. His curiosity will help him on the battle field.

Quote: “We’ll ride down every road, see the world together, it’ll be amazing!”

Animations
————————
Entrance: Luca walks wobbly onto the battlefield.
Victory: Luca hops on a Vespa and rides past the battlefield.
KO: Luca turns back into a sea monster and sits down looking sad.

White Skill: Curiously Curious
Luca throws a bunch of human items (an alarm, some cards, apples, a toy car, and a doll.) The last item is another apple, and instead of throwing it, he eats it, healing him for X HP.

Green Skill: From the Deep
Luca becomes a sea monster and flops around the battlefield, dealing X damage to all enemies. This also scares enemies below level X.

Blue Skill: Fresh Air
Luca breathes the fresh air, doubling his skill power for the rest of the wave.

Purple Skill: Gone to School
Every time an enemy is defeated, Luca gets stacked with Knowledge. It lasts 15 seconds.

Red Skill: Practice Makes Perfect
When Luca is effected by a debuff, he increases his attack speed by 50% and his skill power is increased by 30%.

What happens?: Luca is out of school for the summer and he decides to go take a trip underwater. He finds Alberto and asks if he can come with him. The two jump underwater and find a bunch of creeps.

Luca: I mean… I’m happy… but also kinda sad.
Alberto: Mm-hm.
Luca: And I’ll miss my friends there.
Alberto: Uh-huh.
Luca: And I think I-
Alberto: It’s okay kid! Your out of school. Enjoy this time!
Alberto: Anyways, are your parents okay with you going on a trip by yourself.
Luca: Yes. They said they are okay. They trust me.
Alberto: Good…
Luca: …
Alberto: …
Luca: Okay! Okay! I’m scared to go alone! And I-
Alberto: I’ll go with you… just calm down.

Alberto: What the heck! These are NOT sea monsters.
Luca: I know! They’re creeps.

You need 1 more to luca to befriend with

Also, what does Knowledge do?

Yeah every hero needs two friends… Maybe his second friend could be either Mike Wazouwski or Sully and Boo.

Either of these will work since they are secretly monsters

Is the best concept