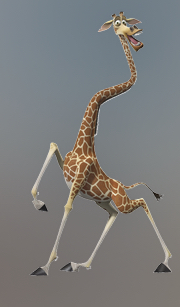 Entrance: Melman will steadily walk into the battlefield in hopes of not tripping and falling over.

Basic Attack: Melman grabs a empty water bottle off the floor and throws it at the farthest enemy dealing 702 basic damage

Victory: Melman will wipe his forehead and get in a relaxed/tired position.

Defeat: Melman will try to keep on his feet but will trip and fall over.

(Melman will try to charge at the opponents but instead will accidentally fall on the closest opponent dealing 1030 normal damage.)

Green Skill: White Noise (Melman will turn on white noise and fall asleep. Every second Melman is asleep he will gain back 300 HP. Meanwhile, the three farthest opponents will be stunned for 6 seconds.)

(Melman will whistle, queuing King Julien to fly over the battlefield in his airplane dropping acorns on the opponents. 1 Acorn deals 5047 normal damage.)

(There is a 50/50 chance of King Julien’s airplane crashing into the battlefield dealing 10789 fantastic damage.

Melman and Fear try to overcome their fear of… well… everything!

For Green Skill, Enemies are now stunned for 13 seconds.

Rex is surprised. One person is scared of him… Melman.

Interesting, I did a Melman concept as well with the same role but I like mine better (obvious bias) but this is pretty good too