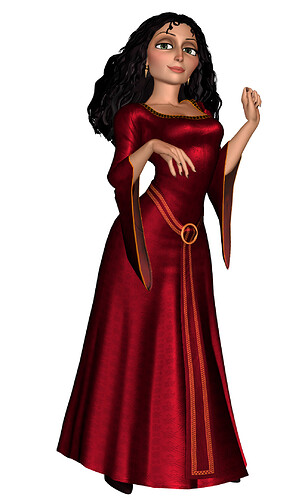 Mother Gothel uses her charisma and cruelty to fool her enemies

Basic attack: Gothel runs forward and strikes an enemy with her knife

White skill : Cloak and Dagger
At the baginning of each wave, Gothel comes in Invisible, and reappears when she loses under 75% hp

Green skill: Young and Beautiful
When Gothel reaches under 50% hp, she revives to 95% hp and Cleanses herself

Blue skill: You won’t survive
When the front most ally falls below 30% hp, Gothel creates a Shield around them until they are KO’d

Red skill: Only for Me
When an enemy below 15% hp gets into melee range of Gothel, she Saps them until they are KO’d

This isn’t funny… you’ve gotta stop this spam of concepts and actually put some thought into them. I’m gonna start flagging you for this.

Please, please, PLEASE. Just. Slow. Down. And. Not. Spam.

We want you to understand this. We do not hate you because we want you to actually think about these concepts to make them great. This will be harmful for you to continue this path.