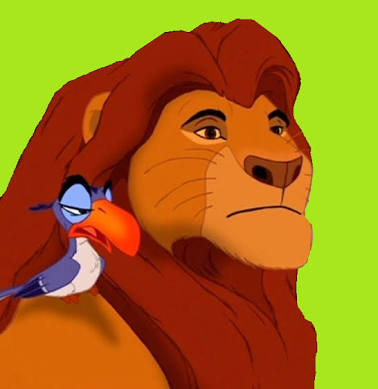 Mufasa & Zazu are a back line support duo. With Mufasa inspiring his team with his powerful roar and Zazu using his wings to scout the enemy team for weaknesses.

WHITE SKILL
Mighty Roar - Mufasa does a mighty roar! Inspiring his allies giving them x armor, x reality and healing them for x hp over 10 seconds. His roar also causes his enemies to cower in fear scaring them for 8 seconds.

GREEN SKILL
A Bird’s Eye View - Mufasa orders Zazu to scout the enemy team for weaknesses. Studying enemies and marking the enemy with the least hp as Most Wanted for 8 seconds.

BLUE SKILL
Hunting Party - Mufasa orders his lioness to attack, causing 2 lioness to pounce the Most Wanted enemy. Dealing x dmg & stunning it for 6 seconds before running off. If there is no most wanted enemy, they pounce the furthest enemy.

PURPLE SKILL
The King’s Tactics - When Mufasa & Zazu damage an enemy affected by a debuff with hunting party they gain 200 energy per debuff currently on the target.