Okay, so even ignoring the issues I have with normal FtN contests (Ever rising diamond point requirements without the means to freely get said diamonds not increasing and the consistently mediocre rewards.) This variant is just kinda insulting.

Namely, because the requirements are at odds with the current circumstance. In Arena and Coliseum challanger for Server 1, Normal damage cannot be dealt. Half the muppets primarily deal normal damage, with Miss Piggy not dealing fantastic damage all without a disk and Kermit flatout not doing ANY damage (though he’s a pure support character, so there’s reason to have him.)

I doubt I’m alone in thinking that this sort of contest just DOESN’T work when the challenger rules are at odds with them.

In Arena and Coliseum challanger for Server 1, Normal damage cannot be dealt

I agree completely with your text, but just wanted to add that Challenger rules are the same on all servers. So this contest doesn’t make sense on any server.

They could do it with NBC characters, it would be much easier…

NBC? who are they, I am awful with abbreviations. Anyway, I am close to challengers so I’m not there yet, but these are awful rules, but I really want those cosmetic crates…

My parents won’t let me watch it

I don’t think it actually would be. Some of them are rather outdated. The whole idea of forcing certain characters is wrong.

I thought that was the reason CW and Surge contest in the past got so much hate and were gone, but now that i see this, those were much better. They forced certain characters, but your guild could help you out with mercs

All the while we get 640 points per battle, it doesn’t work in any scenario lol. The featured heroes could be full meta fantastic damage and we could battle with them all weekend, yet it wouldn’t make a dent in the points we need.

Disappointingly, it’s better just to treat it as a bog standard fortify. Use the diamonds won from playing Challenger properly to boost your score, as they will be worth more

As a general reminder, there was an FTN a while back that offered 75 mod upgrade pieces for the non-invasion upgrade and I think most people would agree that A: that was awesome and B: we would probably be a bit more forgiving of the rest if that sort of thing happend more often.

This is honestly just a terrible contest. Forget the fact that these characters do little to no damage in Arena and coliseum, two of the characters are event exclusives which knocks out TONS of people from having a fighting chance. One character is only available in diamond crates. It’s a total money grab.

Because it’s scary? Come on. It’s only PG

No becuase the demonicism of the characters…
But back on topic

I remember that contests with scoring for using certain heroes in Arena and/or Coli were more common way back when, well before Challenger leagues introduced special rules that further limited the number of heroes that could be used. And even without those rules, people would complain about those contests, because some heroes would be outdated and useless and others would be too new for most players to have leveled up.

When the scoring was for using heroes in City Watch, those same problems applied, but at least people could hire a merc and score points that way. Of course, nowadays, with people needing to maximize their red skill chip earnings from Epic City Watch in order to have a chance at keeping more than one or two skills at max level, being forced to use certain heroes for City Watch is arguably worse than being forced to do so for PvP.

That leaves Surge, where players have the best chance to score points with underdeveloped heroes and where mercs can be of the greatest use in helping score points. But that brings up a different problem, namely how to keep players from hiring all the good contest mercs for themselves and leaving their guildmates high and dry. I’d be perfectly fine with points not being awarded for hired mercs, but I suspect I’m in a very small minority.

I’m not really sure if it’s still possible to design a contest that awards points for using certain heroes and have it appeal to the majority of players. I suppose the next best thing is a contest like this one, where (as Pipsqueak pointed out) the points one can earn for using those heroes hardly matters at all. It’s a shame, really, because it would be nice to have more variety in these contests.

I think I will sit one out. The rewards they offer are totally horrible, barely helpful in any situation. I know I can reach 1M but I dont want to

Contests are supposed to be events to help players keep up. What can 4Mil gold, 100k bazaar token help me? I earn more of them in Invasion and Surge

And to make it worse, the scoring system is just as horrible. They expect us to spend more and gain less? What kind of logic is that???

I dont use Chef nor even plan to so top prize means nothing to me! Good job, Perblue, for giving players all the useless stuff in the most expensive contest in this game history ever!!!

in server 16, the scoring system is slightly better than previous FTN
although it’s still worse than the FTN 2 months ago 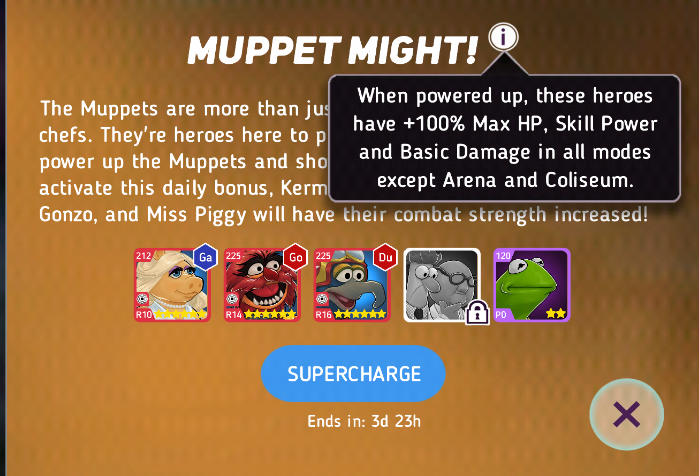 Maybe this should have been a surge/Coliseum instead ? Maybe a bit of a mess up per blu

Can’t be a coincidence surely ?

Must agree with the thread creator.
Here a developer must be far-sighted.
If you know in the back of your mind that there is such an event coming and you know that 4 weeks before, then I can not such arena or Colosseum rules so fesetzten.
This is simply not good what was implemented here.

I would recommend finally hire someone who notices something like that beforehand. Lately, such things happen more and more often where you know in advance that this can not go well.