Nobody Gets Left Behind

This concept was requested by @Prince-Aamir. Hope you enjoy! 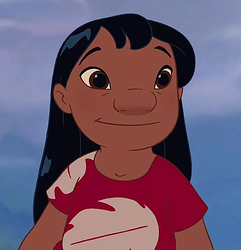 “You can leave if you want. I’ll remember you though. I remember everyone that leaves."

With some hula dancing and some practical voodoo, Lilo is willing to support her allies as family means no one gets left behind.

Role: Support
Position: Middle
Trial Team: Blue
Entrance: Rushes into position and gets out voodoo jar
Victory: Changes into her traditional hula clothes and dances hula
Defeat: She stomps and sticks her tongue out.
Attack: Grabs a spoon from her voodoo jar and throws it at an enemy

White Skill: Meet Scrump (Fantastic Damage)
Lilo takes out Scrump and hugs it, healing herself and all allies X HP over 8 seconds and granting them 3 stacks of “Hardy”. She then throws it into the fray and Scrump explodes, dealing X damage to enemies in an area and blinding them for 9 seconds.

Green Skill: Rock A Hula
Lilo turns on hula music and begins to dance, granting allies 75% attack speed increase and reducing the damage they take from enemies by 45%.

The damage reduction is reduced against enemies above level X.

Blue Skill: The Punishment (Fantastic Damage)
Lilo shakes her voodoo jar, removing all debuffs, granting 300 energy, and X skill power to herself and allies. Then, all enemies are dealt X damage, scared for 12 seconds, and are randomly applied debuffs removed from this skill.

Applying debuffs has a chance to fail against enemies above level X.

When an debuff is removed from an ally, they become invincible for 3 seconds.

The healing is reduced on allies above level X.

Lilo-Kim Possible
What’s The Stitch?
Steal Reality From Scared Enemies
+X Amor to Lilo and allies while they are studied
• Allies steal 7% (+7 per star level) of the enemy’s reality when they scare them.

Got anything to request?

Can you do Peg Leg Pete? Also, nice concept!

Just edit the wiki and add him in there.

Yes. Please add all requests to the wiki, please.