Why do get an opponent with level 112 in city watch? 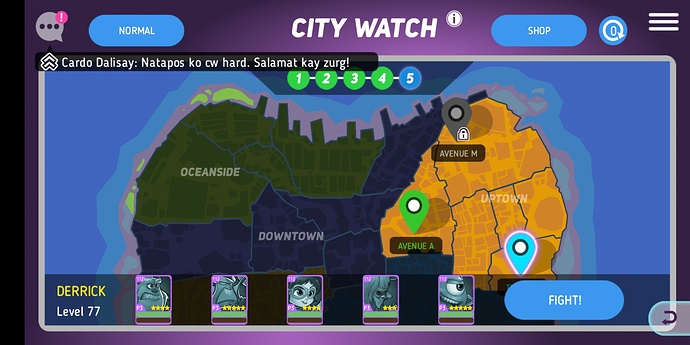 I’ll trade you my 180 for your 112!
While the level of that team is 112, their skills are 77 or lower. If you charge up heroes in the first few waves, and are careful about keeping them charged as you go, you should be able to clear that easily. You may need a sacrifice team here and there though.

I really, REALLY dislike this feature (I guess it’s a feature, not a bug). It renders many abilities useless (Ralph‘s stun, Sully‘s scare, WALL-E‘s freeze etc.). Eve is hampered as well because she relies on disabled enemies. Please change that. I get that the difficulty has to adapt but this is a bit ridiculous. And it leads to some strange strategies: If you’re using Nick, it’s best not to level his charm ability, because leveling it doesn’t help that much in combat. But if you’ve leveled it, Nick‘s power goes up leading to much higher opponent levels. We shouldn’t have to not level an ability to prevent the city watch opponents to be overpowered. Please change that!
Ä

Spot on, all this does is render stun lock teams useless. Not only that the higher the level they are, the stronger opponent you end up attracting. Even though a lv 90 skill may fail like a level 1 skill…

Instead, you just load up your sheer power characters and try defeat them before they defeat you.

Not much of a strategy really.

Thankfully we have City Watch raiding now at least so I don’t have to see this anywhere near as much as I used to.

Except the fact that raiding doesn’t complete your daily and you can’t raid after hitting one.