Oh... how I wish they were added to the game! Oliver & Dodger! 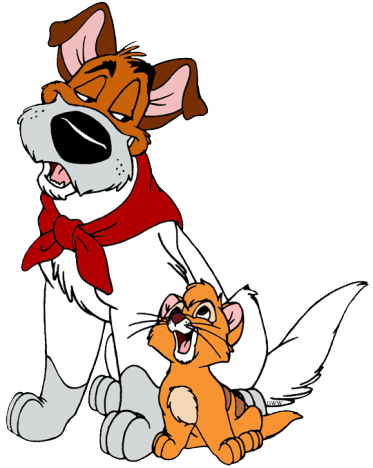 Entrance: Oliver and Dodger runs towards their position.
Victory: Dodger pulls out his sunglasses, and then both dance.
Defeat: Oliver becomes sad and sobs a bit, Dodger pats his head to cheer him up, Dodger looks a bit worried during this animation.

Basic attack: Dodger hits enemies with his paw while Oliver scratches them with his claws.

Dodger calls in a taxi to arrive onto the battlefield, Taxi then drives through enemies, dealing X damage, decreasing attack and movement speed to 25% for 15 seconds to all enemies, and removing up to 4 buffs per enemy.

While Charmed enemies are on the battlefield, Oliver and Dodger receive 50% less damage from all sources.

Blue skill: Snack Steal
Dodger and Oliver run towards the enemy with the highest Max HP, stealing 40% of their Max HP as a heal for themselves and stealing all of their active buffs. After this, they return to their original position and increase their own attack and movement speed by 125% for 10 seconds.

While performing this skill Dodger and Oliver are untargetable.

Stealing HP is less effective against enemies above level X.

Purple skill: Worriless
Dodger and Oliver have a 60% chance to dodge all enemy attacks and debuffs.

Dodger and Oliver gain 1 stack of Hardy whenever they dodge.

Dodger and Oliver’s chance to dodge is reduced against enemies who are above level X.

Red skill: Dynamic Duo
Each time Dodger and Oliver applies a debuff to an enemy they become Energized for 8 seconds and receive 55 extra energy each time they perform a basic attack, this buff stacks up to 3 times.

Increasing duration of negative effects has a chance to fail on enemies above level X.

Battle Badge
Requires to charge: Slow is applied to 3 enemies

We need them in the game at some point!

I wonder… if they will be added soon, I really wish they were.