The second Touhou Character Concept I make, and of course is Marisa Kirisame, the ordinary magician. I’ll do more Touhou Concepts in the future so if you like Touhou (Or my Concepts) I hope you’ll like them!
Feedback is very appreciated!

Marisa is a ordinary magician that likes to… borrow things, she uses her magic to attack her enemies with full power. 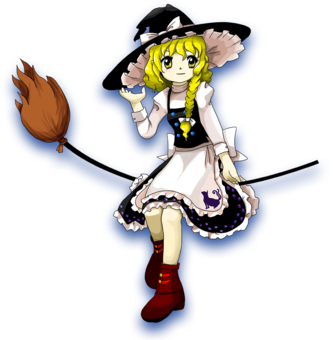 Entrance: She comes standing in her broom, then sits down on the broom.
Victory: She flies away on her broom.
Defeat: She falls of her broom in a comically way.
Basic Attack: She fires a star at the enemy.

Stealing a buff have a chance to fail against enemies above X level.

Red Skill
“Ordinary Magician.”
After 30 seconds has passed on the wave, “Master Spark” turns into a Final Spark. A Final Spark deals X more damage per second and uses 5% of the enemies Max. HP as bonus Fantastic Damage per second.

Friendship Disks
(With Kristoff and Sven.)
Campaign Name: Ice Magic.
Friendship Disk: Hakkero of Ice.
Marisa wants to try her Ice Magic on creeps, Kristoff sees her and gets interested in Marisa’s Magic.

Marisa gains 5% attack speed per stolen buff with “Borrowing” for the rest of the Wave. (+5% Attack Speed per Star.)