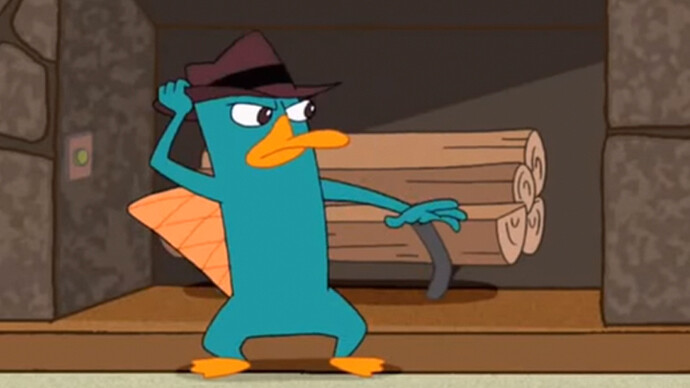 ► Basic Damage✊🏻: Perry jumps up, kicks the enemy and then bounces back to the starting position!

Perry Of All Trades

Passive: The basic attack targets the enemy with the most Energy, knocking back.
Active: The player chooses one of five skills for Perry to perform when “Perry Of All Trades” is activated:

Shattered enemies take 8% of their Max HP as True Damage each time they are dealt Fantastic Damage from an enemy.Skills that deal damage over time can only trigger Shatter once per second at max.
Shatter has a chance to not be applied to enemies above Level X.

Perry Encourages for all his allies, giving himself and allies X Basic Damage for 8 seconds and increasing their attack and movement speed by 80% for 8 seconds.

When Perry damages an enemy with basic damage and skill, he steals 40 energy from them.

The amount of energy stolen is less effective against enemies above level X.

“Boomerang Fedora” damages enemies 5 more times.
If an ally damages the most wanted enemy. Perry gain 50 Energy and 5 Crit Damage for the rest of the wave up to a maximum of 150 Crit Damage.

X Skill Power
X Reality to his and allies

X Damage
X Armor to His and allies

I think the Purple skill could maybe do with one or two more effects (it’s not bad; just not particularly strong), but otherwise, great concept!

He is now leaked

First of all, he wasn’t “leaked”. He was announced in official Patch Notes.

Second of all… there really wasn’t a need to revive the topic just to announce that, as much as I understand the sentiment behind it.