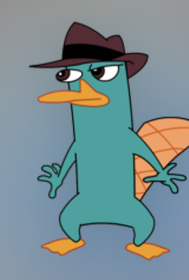 Description: This semi-aquatic, egg laying mammal of action can jump into the fray without being spotted by onlookers.)

Entrance: Perry will kick open a door and get into fighting position

(Perry will throw his fedora at the farthest opponent (acting like a boomerang) dealing 547 fantastic damage.)

Green Skill: Keister Kick (Perry will kick an opponents buttocks, stunning them for 7 seconds. This attack will also work in the middle of the opponents.)

(Perrys basic attack now deals 2547 fantastic damage. The animation for the skill is Perry dusting off his hat.)

Purple Skill: Jump into the Fray (If not using auto…) Perry will have a choice whether he wants to jump back into his teams layout, or stay in the middle. There will be arrows looking like this

Perry The Platypus and Phineas Flynn

“A Walk in the Park”

Phineas is taking Perry for a walk, but Dr. Doofenshmirtz is wreaking havoc on the city. So, Perry has to decide whether to blow his cover, or do nothing.

Perry The Platypus and Kim Possible

Perry and Kim are both accidentally assigned to the same mission.