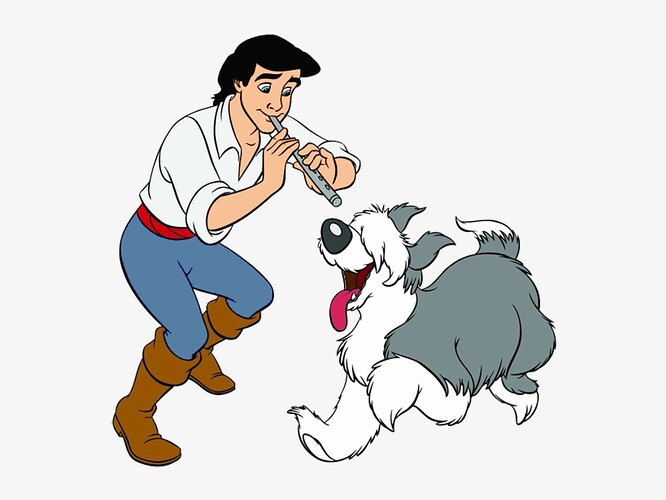 image820×615 111 KB
Quote: “When I find the right girl, I’ll know.
Without a doubt, it’ll just “bam!” hit me, like lightning.”
Eric is a respected sailor and Prince. An obvious great choice, this majestic mariner will definitely secure a win for your team!

Entrance: Eric swings down from a rope with Max in his arms
Victory: Eric plays a tube on his flute and Max dances around
Defeat: Eric scratches the back of his neck and Max cowers behind Eric

White skill: Skillful Study
Eric pulls out his telescope and Studies all enemies. He finds the weakest ally and commands Max to charge. Max rams the enemy, Knocking them back and dealing x damage.

Green skill: Playful Pooch
Max rolls over and Eric gives him a belly rub, Charming the frontmost enemy for the rest of the wave.

Blue skill: All Hands On Deck
Eric calls in a sailor to swing on a rope and dump a bucket of soapy water on the enemy that last damaged him. That enemy is Blinded and Stunned until Eric uses his white skill.

Purple skill: Places To Go
When Eric uses Playful Pooch, he Cleanses himself from all debuffs

Red skill: Fathoms Below
When ever Eric is Frozen, Stunned, Blinded, or Cursed, he gains x% of the reality the enemy that attacked him had.

Princely Buddies
Eric and Phillip argue if life is better on land or on the sea… until Ariel tells them life on both is pretty great
Friend: Prince Phillip
Allies: Aladdin, Flynn Rider, Beast
Disc function: Eric gains x% attack speed is he is Knocked back
Disc icon: Beach (cause there’s land and sea)

Very good! I especially like the green skill. This character would be a great addition to the game!

The amount the thought that went into this! I love this idea. I hope to see him in the game soon.

Nothing here is supportive.

Also his position needs to be front if he’s doing basic punches.

Nothing here is supportive.

I agree. He is more damage or control. Probably control tho

Kim’s basic attack is a kick, and she’s not in the front

That has a projectile. Not mentioned here.