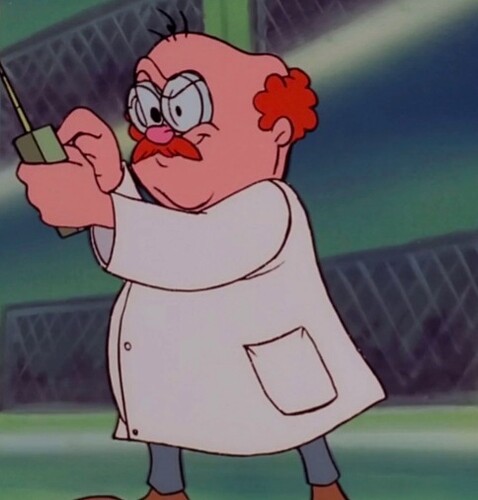 Quotes - “Haven’t I told you never to play with my superweapons? You could devastate yourself.”

Bio - This mad scientist will use his array of inventions to take down the enemy team, and maybe the Rescue Rangers.

Entrance - Nimnul walks into battle and pulls out a ray.

Victory - Nimnul jumps up and down and claps.

Defeat - Nimnul stomps his foot on the ground.

Active: Nimnul zaps 2 pill bugs with his enlarging ray. The pill bugs have x max hp and deal x damage with their own basic attack. The pill bugs stun enemies they hit for 2 seconds each time they attack.
The stun has a chance to fail on enemies above level x

Green Skill - Robo Dogs (Normal Damage)
Every 9 seconds Nimnul summons 2 cat catching robot dogs. The dogs have x max hp and deal x damage with their own basic attacks. The dogs stun enemies they hit for 1 second each time they attack.
The stun has a chance to fail on enemies above level x.

Professor Nimnul and The Mad Hatter
Name - We’re All Mad

Let me know which Chip N Dale Rescue Rangers characters, if any, you’d like to see me do concepts for next.

What does Nimnul do for the victory? It just says Nimnul. lol

Thanks for noticing this. I’ve updated it.

I’ve only seen the new Chip and Dale movie. I haven’t seen the original show, lol. I probably should.