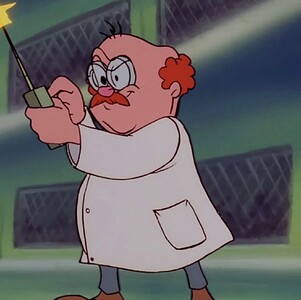 Entrance: Nimnul walks into his position while pulling out his laser gun.
Victory: Nimnul laughs.
Defeat: Nimnul falls to the ground.

Quote: “Haven’t I told you never to play with my superweapons? You could devastate yourself.”

Nimnul calls his Robot Dog to arrive on the battlefield, Robot Dog has X Max HP, X Armor, X Reality, X Basic Damage and is immune to all debuffs. Each time Robot Dog attacks an enemy the active debuffs on them are increased by 2 seconds and have removed 2 of their active buffs.

When Nimnul uses this skill again and Robot Dog is already on the battlefield, the Robot Dog is fully healed and gains Reflect for 6 seconds.

Each use of this skill also increases Nimnul’s Basic Damage and Skill Power by 20% and grants him 3 stacks of Hardy.

Green Skill: Gigantico Ray Gun
Nimnul uses his device to Enlarge the frontmost ally for the next 12 seconds, cleansing them, immediately healing them by 100% of their Max HP, and applying to them 8 stacks of Hardy when they return to normal size.

Enlarged allies gain a 200% bonus Max HP, and have their Basic Damage and Skill Power increased by 100% and granting them immunity to all debuffs.

Summoned allies can’t be targeted by this skill.

Blue Skill: Under Hypnosis
Nimnul uses his device to hypnosis the enemy team, removing all Hardy stacks from all enemies and taking control of 3 enemies making them Charmed for the next 12 seconds. Charmed allies by this skill gain 100% Attack and Movement Speed, have their Basic Damage increased by X and remove 3 active buffs from targets they damage, all removed buffs by Charmed units will be applied to Nimnul. When Charm ends or is cleansed enemies will be stunned for 5 seconds.

Nimnul shares 20% of his Basic Damage and Skill Power with his allies.

While an ally is Enlarged, all enemies deal 30% less damage, stacking for each Enlarged ally up to 2 times.

This is very similar to characters like mother Gothel and the horned king, and relies on his white skill

I like this concept! The skills all seem pretty realistic.

This is very similar to characters like mother Gothel and the horned king, and relies on his white skill

No, he summons, yes, but all other skills aren’t related to the summoned units. Gothel and Horned King focus only on their summons.

My bad! I didn’t say they were identical, but they are a little similar.