Queen of the Changelings (My Little Pony Hero Concept)

So I will admit that I am aware Valentine’s is over a week ago and this concept was way overdue, but I did have some struggles with trying to see how this villain can work. I think I did…somewhat decent, consider that I had to come up with a new ability. But anyway, I’m not gonna bore you with this wall of text, so here’s Queen Chrysalis from My Little Pony: Friendship is Magic!
P.S.: Not counting Spies in Disguise, this is my first third party concept! 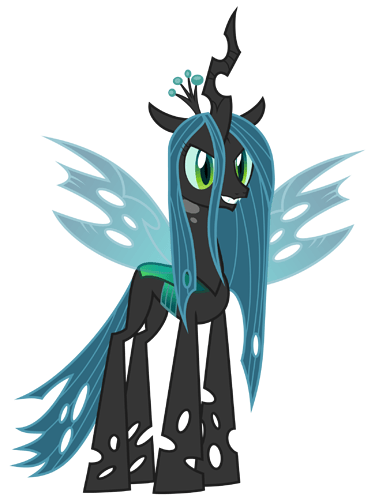 d36cfa4fe984085306675ffb0a379b0d1600×2133 524 KB
Description: The Queen of the Changelings has arrived in the City, ready to terrify and imitate foes!
Quote: “As Queen of the Changelings, it is up to me to find food for my subjects. Equestria has more love than any place I’ve ever encountered. My fellow changelings will be able to devour so much of it that we will gain more power than we have ever dreamed of!”
Role: Control
Position: Midline
Stars: 2
Trial Team: Yellow
Entrance: Flies onto the field like a bug
Basic Attack: Spits acid at an enemy
Victory: Struts proudly at her victory
Defeat: Snarls and lunges at the enemies before collapsing in defeat

Nice concept. Nice to know another fan of My Little Pony