A few guildies have been using Quick Fight in Surge extremely successfully to the point where I’m not even sure what the hell is happening and if it is working as expected. See for yourself:

What I’ve done so far:

Can someone explain to me how it was possible for him to win these fights using Quick Fight?

If those are raids, then the team doesn’t need to win as long as the power is comparable.
Since the power is given almost only by skill levels, it’s not difficult for those reds of similar level to pass the yellows in power, as rank doesn’t change it basically at all.
Now idk the actual power of those lines, but it’s a possibility that might be worth looking into

Lets focus on the 2nd lineup as it is the most frustrating one. My Y3 Zeus alone defeats it 10 out of 10 without dropping below 50% hp. How could it possibly defeat Y3 Zeus + 4 other strong Y2-3 heroes?

These are quick fights - not raids

You can’t distinguish quick fight and raid in Surge by the way. They look the same

So maybe, they actually raided?

The first matchup cannot be raided due to power deficiency.

These are Quick Fights, I personally asked and the team power is too low to raid. When I use Quick Fight I usually get worse results than manual, not better, let alone the results of the screenshots. Does anyone know how it simulates the battles? Is there some kind of cheese I’m missing?

If you are absolutely sure they are quick fights, then its a mystery. Cuz raids can make sense, but quick fights seem, as u said, impossible

So… anyone have any idea how to do this? My quick fights never work.

Are those same guildmates still getting those seemingly-impossible wins in surge?

From time to time yes, its not like it happens every time.

From time to time yes, its not like it happens every time.

You personally asked the player in question? Or someone else?

Technically it would be possible in some cases to raid those lines.

Hm. If I were in your place, what I think I’d do is this:

A couple of years ago, one member of a guild we frequently faced in wars kept getting these really improbable wins against us, using older, under-leveled heroes with no synergies to beat teams with high-level meta heroes. I ended up asking support to look at things, if possible, to make sure they were legit wins, and while that player never left the game, the last several times we faced that guild either he didn’t attack or he attacked much weaker opponents.

I don’t think they are doing anything unethical, I think its more like the quick fight is sometimes just broken.

Not as impossible as the ones that made me spawn this thread, but still hard to believe fights: 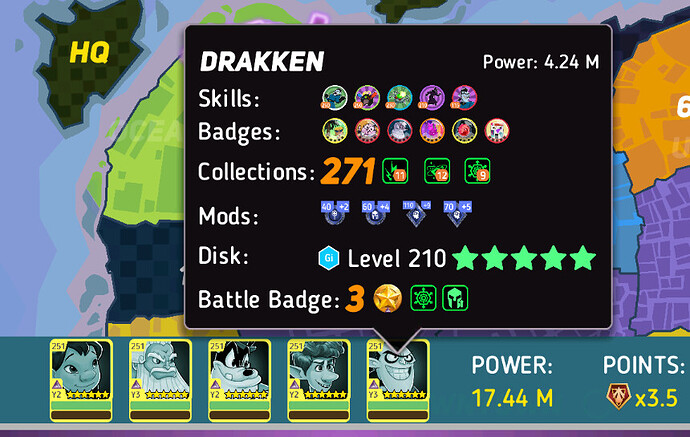 A fresh one that I see no way this Vinny can even survive the initial damage from Zeus let alone not suicide himself on 3 reflect heroes. If this was not quick match, it would have absolutely been a loss. Maybe the game calculates things incorrectly for surge due to the guild bonuses?

Well, Fairy Godmother could be giving enough protection from the reflects, but it does seem like Zeus would just vaporize that line, assuming he has the Hades disk. And it’s possible that the quick fight logic is flawed; I’ve frequently run into friend campaign fights that I lose if I try to do a quick fight on, but win with ease if I run the fight through on auto.

I’m bored and frustrated enough with surge that I may play around with that myself to see what happens.

but it does seem like Zeus would just vaporize that line, assuming he has the Hades disk.

Vinny’s basic attack may be faster than Zeus’ white and it may be high enough to oneshot him
This doesn’t look that unrealistic, that enemy line has no defense, besides the reflects countered by FGM

The ones in the first post however are rather impossible…

Rule of thumb: heroes at the same rank (especially newer!) have roughly the same Max HP. Whereas anything below has much less (12 ranks is roughly 10x less Max HP).

I personally think Vinny could murder the enemy team, at the same time though… FGM, Barbossa and Stitch has 1/70x of Max HP of the enemy lines and will die in one hit. Ariel would have 1/10x.

Keep in mind there are several paths a fight can take. Several stats are % chance of (x). So if there is a 10% chance of a critical strike for a toon’s attack then the result of that could yield a different end result every 10th fight.
Also some toons like kronk have different paths that their skills take which also can affect the result.

Zeus would go first, much before Vinny, and he ofc has the Ha disk and its maxed out. He would literally kill all 4 heroes except Fairy. If Vinny even manages to survive he would be at low HP (Fairy would have tried to heal one of the red heroes) and would not stand a chance vs 5 full HP heroes with reflect on (Fairy can’t reduce it that much). Even Drakken alone would 1shot Vinny 2sec into the fight.

Idk I am starting to think there is foul play at hand. I’ve seen them clear 30-40 zones in minutes without a single failure and many questionable fights. Either that or Quick Fight is buggy as hell. No one is that good and we only get 10 raids.