Quite A Great Genius

This is a gift from the DHBM Advent Calendar fro @Lucky-Oswald. Enjoy! 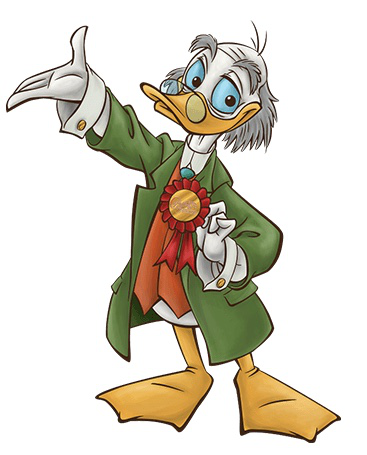 The great genius duck Ludwig Von Drake uses his intelligence and inventions to help out in the fight.

Role: Control
Position: Middle
Trial Team: Red
Entrance: Teleports into the battlefield with a teleporting Bathtub.
Victory: Thinks of a great idea as a lightbulb shines above his head
Defeat: Tries to throw an explosion potion but it explodes in his face
Attack: Shoots from his Ray gun

White Skill: Robotic Copies (Normal Damage)
Ludwig Von Drake summons robotic copies of Mickey and his friends to ride through enemies, dealing X damage and studying them or extending their current study for 3 seconds per robot. If the enemy is already studied, they take X damage over 12 seconds.

Green Skill: Explosion Formula (Normal Damage)
Ludwig pours liquid in beaker into another one, he puts a cap on it, shakes it, and throws into the fray, dealing X damage to enemies in an area, and stunning them for 6 seconds. If enemies are studied, they also have their attack and movement speed reduced by 50% for 12 seconds.

Blue Skill: Clever Calculations
Ludwig calculates the probabilities, studying all enemies for 10 seconds and granting himself 300 energy. If enemies are already studied, they lose X armor.

Purple Skill: Genius Inventor
Ludwig gains X skill power for each study on the battlefield. This includes studies on allies.

Red Skill: Study Strength
If an enemy blocks a study they receive 3 stacks of “Penalty”. Enemies deal 10% less damage with each stack of “Penalty” that they have, up to 6 stacks.

Allies deal 100% more damage to studied enemies and ignore 50% of their armor.

Ludwig-Bunsen & Beaker
Calculated Experiments
Punish Dodging Enemies
+X Armor while studied
+X Damage over time to studied enemies with” Robotic Copies”
• Every 5 seconds, when an enemy dodges or blocks an attack, skill, or a debuff, they will be stunned for 2 (+2 per star level) seconds. This disk cannot be reduced by tenacity and cannot be dodged, evaded, blocked by “Hardy” or passives.
• Enemies that dodge or block attacks, skills, or debuffs will also lose X skill power.

Ludwig-Gizmoduck
New Gizmo-Gear
Convert Debuffs to Buffs
+X Skill Power
+X Max HP to Ludwig Von Drake and Damage role allies
• Every 7 (-1 per star level) debuffs applied to an ally will be flipped into a buff.

Got a concept you want to request? List it here! (Limited one per person)