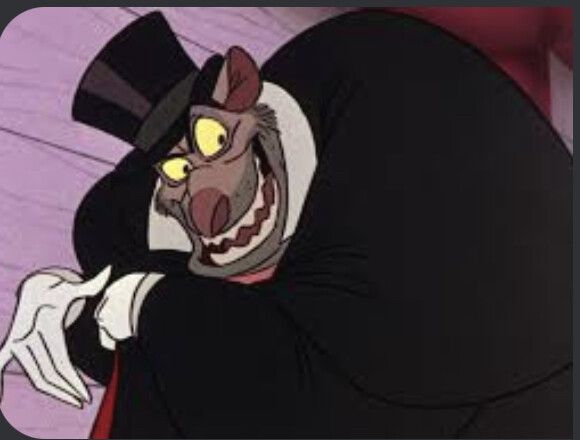 I am a huge fan of “The Great Mouse Detective”, so hopefully this turns out good for my two “followers”

Info: Ratigan is a(n) self absorbed villain who’s only wish is to be president over all the rodents in the land.
Stars:

Catchphrase: “Quite an ingenious scheme, ay, Flaversham?”
Entrance: Ratigan walks in covered in his cloak and then throws it over him (similar to Meta Knight’s final smash in “Super Smash Bros. Brawl”)

Win: Ratigan will do his evil laugh thingy

Loss: The cat from “The great mouse detective” will come and eat him)

(If he is facing off against a Zootopia character. He will get a slight debuff during the match)

White Skill: Dinner Bell (Ratigan will ring a dinner bell and a cat will jump out, eat an opponent, then spit them out (does 8224 damage)

Green Skill: Robot Mayor (Ratigan will release a robot of the mayor from “The Great Mouse Detective”. The robot will attack the opponents doing half the damage of “Dinner Bell” but is repetitive during the match)

Blue Skill: Cork Pop (Ratigan will pop a cork off a bottle and the contents will spill everywhere (Cork Pop 1900 damage, Liquid 7144)

Red Skill: I’m Full! (If a hero on the other team gets eaten, instead of getting spat out, they will instantly die.

He is team YELLOW

Clearly, NOT A TOY!

Ratigan: "Who in the world put this… toy! In my cell?

Ratigan: “Uh, yeah, you are! You even shoot those plastic ball things”

Ratigan: “Just except it, You’re a toy!”
5 likes if you want to hear Jack’s conversation