Mickey Mouse: Support
His healing is incredible, but the damage from his basic attacks isn’t that good. I just think that should be buffed and he’ll have balanced damage and HP.

Scar: Damage
Blue Skill is so overpowered, his invisibility is beast. He does loads of damage, and I think does the most damage of ALL of the heroes in this list.

Mr Incredible: Tank
Blue Skill also is really overpowered, but his damage is what makes him so OP. The Fantastic Damage on Green skill does so much damage! He’s great to have on your team!

Baymax: Another Tank
Green skill is great, but the armor is insanely powerful and useful, especially against Damage heroes

Ian Lightfoot: Control
When he shrinks his opponent, it’s so powerful, they do way less damage and their HP is automatically deducted. Ian is a beast.

Have any other heroes you think should be on this list? Let me know!

The maticore is pretty decent

I typically use Pooh and Eeyore

Pooh is useful for me. Powerline I’d POWER-ful and Hank and Dory is decent in terms of combat performance

Yeah Pooh is a great red team hero. I love playing him, especially in Surge

Yeah she can be good, but not always

I don’t see the reason behind Timon and Pumbaa but everything else I agree.

They stop crits, which is good defense

Ahhh that is pretty good 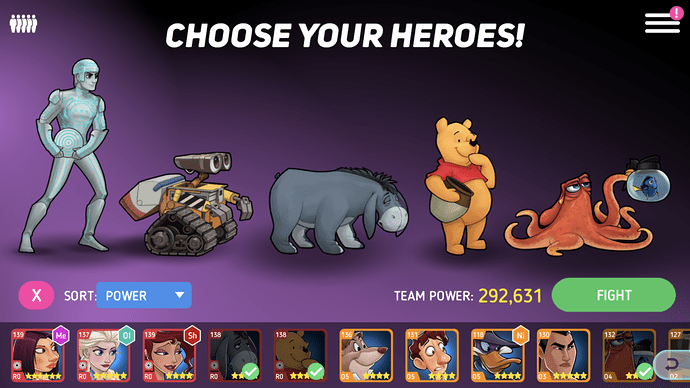 I agree, this is the red team heroes that I typically use.

I also use Hank and Dory. Their Pooh disk makes them less prone to KOing cause they get bonus max HP.

Btw, Sorry for talking about Shang who is on the yellow team, but I’m just providing my reason why I like using Tron.

but I’m just providing my reason why I like using Tron.

Nick is a bonus

That’s always a good one, but I don’t have any characters at red

Yea that is pretty OP

If I had his red skill I’d use him all the time but I don’t have anyone at red.