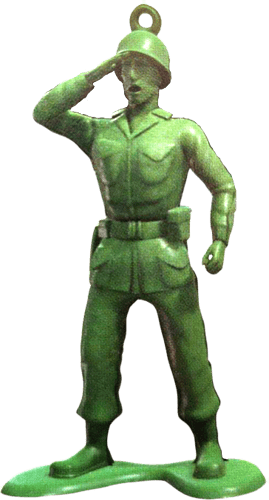 “A good soldier never leaves a man behind.”

Sarge is a mid-line support hero

Entrance: Sarge falls into the battlefield with an open parachute, landing in his position

Victory: Sarge puts his left hand behind his back and salutes his allies with his other hand

Green Skill: On the Lookout
Sarge look into his binoculars, studying all enemies for 12 seconds

Blue Skill: Save a Soldier

Normal Damage
Sarge takes his arm out and swings it downward, having a walkie talkie fall onto all enemies, dealing Y damage

Normal Damage
Every 12 seconds, Sarge’s soldiers stampede across the battlefield, dealing X damage to all enemies, pushing them back, and stunning them for 3 seconds

Red Skill: Strong Plastic
Whenever an ally is healed, that ally is healed for Z more HP and gains a shield equal to 150% of the healing done for 7 seconds

Allies may only gains shields from this skill 5 times

Allies may only gain shields from heals 5 times

Purple sounds busted & it seems unfair to only shield an ally 5 times instead of unlimited like every other shielder.

Normal Damage
Every 12 seconds, Sarge’s soldiers stampede across the battlefield, dealing X damage to all enemies, pushing them back, and stunning them for 3 seconds

But how? The animation would be 12 soldiers running across the field. The only thing I can think of would be that the soldiers would be super tiny but then that’d mean Sarge is also unseeable.

They don’t get limited shields. The shields from any heals are limited. This is to prevent OP-ness

Also, it is passive because it’s “every 12 seconds”

Here’s a key word.
New animation. Yes, it’s every 12 seconds but I’ve never seen it be a new animation EXCEPT Violet

That is what I meant & it is still dumb.

All in all I like the concept, except the basic… Having him heal an ally? Yes, There should be a character that does this imo, but I don’t feel.like it really makes sense for Sarge, sorry.

What I’d like to point out is that pointing at an ally and healing them doesn’t make nearly as much sense as just shooting enemies. Not every Support has to be Miguel.

Also, the white is lacking- it’s just a slightly more powerful version of Woody’s. Speed and BD buffs are overused, they shouldn’t be the main aspect of a supportive skillset. The other skills (not counting red) don’t even support allies, are you sure he should be a Support?

What I’d like to point out is that pointing at an ally and healing them doesn’t make nearly as much sense as just shooting enemies.

What would you suggest?

(I admit, I had trouble finding a logical basic attack…)

Oh, I hadn’t even noticed that. Honestly, the concept feels like it can’t decide what it wants to be. Healing, speed buffs, BD buffs, studying, damage, shields, knockback, stun… it lacks a focus, and flails aimlessly because of it.

I’m not going to sugarcoat it, I’m not a big fan. But I know you can do better, I still remember your Fairy Godmother concept being really good! Maybe you should slow down, get rid of the long to-do list, and take your time to write something you’re proud of instead of burning yourself out.

What would you suggest?

Uhh… shooting enemies? If you think that’s too violent for some reason, he could use a bayonet or simply strike with the butt of his gun.