She's One of Them, A Wolfwalker | Concept

Just in case you don’t know since many people i know had never heard of it, she is from a quite recent movie called Wolfwalkers, made by Cartoon Saloon (the same studio behind Secret of Kells, Song of the Sea, and The Breadwinner), you can check them out just in case you are interested. I wish you’ll enjoy the concept, and any feedback is appreciated. 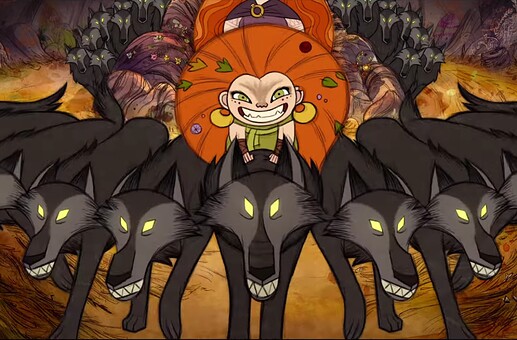 Mebh Óg Mactíre, or Mebh, uses her wild magic to commands her wolves to scares enemies off, smells enemies’ scents, and as well heals her allies. And when she’s asleep, she’ll becomes a wolf who attacks them.

Entrance: Mebh rides a wolf which brings her to her position, Mebh leaps down to the ground and the wolf runs away.

Basic Attack: As a human, Mebh jumps to an enemy and scratches them, then she returns to her position (like Angel). As a wolf, Mebh swipes an enemy with her claws.

Victory: As a human, Mebh growls playfully then laughs. As a wolf, she wags her tail then joyfully howls.

Defeat: As a human (Before Purple), Mebh growls and then barks at enemies angrily. As a wolf, Mebh becomes saddened and lowly whimpers.

White Skill: Running with the Wolves
(Normal Damage)
Mebh commands her pack of wolves to charge towards the enemy line, dealing Y damage and knocking them backwards.

As a wolf, Mebh howls, increasing allies’ attack and movement speed by 80% and silencing all enemies for 12 seconds.

As a wolf, Mebh also becomes Precise for the rest of the battle. Mebh’s Precise cannot be removed, stolen, copied, or blocked by Fatigue.
The dodge is less effective against enemies above level Z.

Blue Skill: Wild Kind of Magic
Mebh uses her magic to heal the ally with the least HP for X HP and cleanse all debuffs from them. The three closest enemies are also silenced for 9 seconds.
Mebh can only uses this on her human form.

Purple Skill: Be a Wolf
When Mebh has fallen to 0 HP, Mebh turns into a wolf and revives for full HP. When Mebh becomes a wolf, she jumps to the front-line and her armor is increased by X. 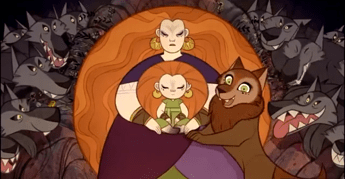 Red Skill: Wolf’s Magic
The first time Mebh reaches 50% of her max HP both as a human and as a wolf, she gains these following bonus depends on the form she’s currently uses.

As a human, “Wild Kind of Magic” also grants the last buff the healed ally has that lasts for 10 seconds, Mebh also gain this buff.

Mebh/Robyn
Campaign: Roaming the City
Disk: Town Tour (Ro)
Immune to Scares at Combat Start
+X reality
When Mebh blocks a scare, she instead gains a stack of Hardy.
Mebh is immune to scares at the first 10 (+2 per star) seconds of each wave.